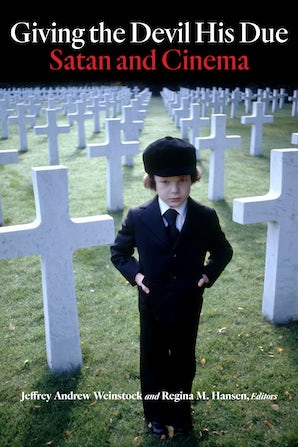 Lucifer and cinema have been intertwined since the origins of the medium. As humankind’s greatest antagonist and the incarnation of pure evil, the cinematic devil embodies our own culturally specific anxieties and desires, reflecting moviegoers’ collective conceptions of good and evil, right and wrong, sin and salvation. Giving the Devil His Due is the first book of its kind to examine the history and significance of Satan onscreen.

Guiding the contributions to this volume is the overarching idea that cinematic representations of Satan reflect not only the hypnotic powers of cinema to explore and depict the fantastic but also shifting social anxieties and desires that concern human morality and our place in the universe.

Hansen and Weinstock have collected (a lucky) thirteen new essays exploring the Devil’s cinematic avatars, from his earliest appearances in the films of George Méliès to the deliciously-living Black Phillip in The Witch (2015). Including discussions of generically-diverse films like Faust (1926), Prince of Darkness (1987), and The Passion of the Christ (2004), this volume will be of interest to theologians and film scholars alike.---Harry M. Benshoff, Professor of Media Arts, University of North Texas

...an excellent overview of an important cinematic character who has proven flexible enough to adapt to a wide range of contexts, themes, and perspectives. This volume is an important step towards understanding why the devil always gets the best lines. - Journal of Religion & Film

Fascinating, lucid, and accessible, these essays create cultural and spiritual conversations about the fantastic nature of the demonic and the place of evil in human affairs. - Choice Reviews

Introduction: Giving the Devil His Due
Regina M. Hansen and Jeffrey Andrew Weinstock | 1

The Sign of the Cross: Georges Méliès and Early Satanic Cinema
Russ Hunter | 15

What’s the Deal with the Devil? The Comedic Devil in Four Films
Katherine A. Fowkes | 58

From the Eternal Sea He Rises, Creating Armies on Either Shore:
The Antichristology of the Omen Franchise
R. Barton Palmer | 86

The Devil’s in the Details: Devilish Desire and Roman Polanski’s The Ninth Gate
Jeffrey Andrew Weinstock | 136

Agency or Allowance:
The Satanic Complications of Female Autonomy in The Witches of Eastwick and The Witch
Simon Bacon | 149

“Roaming the Earth”: Satan in The Last Temptation of Christ and The Passion of the Christ
Catherine O’Brien | 161

Lucifer, Gabriel, and the Angelic Will in The Prophecy and Constantine
Regina M. Hansen | 178

Contributions: Simon Bacon
Simon Bacon is an independent scholar based in Poznan, Poland. He is the coeditor, with Katarzyna Bronk, of Undead Memory: Vampires and Human Memory in Popular Culture (2014) and Growing Up with Vampires: Essays on the Undead in Children’s Media (2018), and the editor of Gothic: A Reader (2018) and Horror: A Companion (2019). He has published three monographs, Becoming Vampire: Difference and the Vampire in Popular Culture (2016), Dracula as Absolute Other: The Troubling and Distracting Specter of Stoker’s Vampire on Screen (2019), Eco Vampires: The Vampire as Environmentalist and Undead Eco-Activist (2021).

Contributions: Katherine A. Fowkes
Katherine A. Fowkes is Emeritus professor of popular culture and media production at Highpoint University. She is the author of The Fantasy Film (2010) and Giving Up the Ghost: Spirits, Ghosts, and Angels in Mainstream Comedy Films (1998).

Contributions: Regina M. Hansen
Regina M. Hansen teaches at Boston University. She publishes and presents on horror, religion in film, neo-Victorianism, and the fantastic. Her works include the edited volumes Supernatural, Humanity and the Soul (with Susan George; 2014) and Roman Catholicism in Fantastic Film, and a special Stephen King issue of Science Fiction Film and Television (with Simon Brown; 2017), along with the novel The Coming Storm (Atheneum 2021). Her writing on film, folklore, and the supernatural has appeared in the Wall Street Journal Review and the children’s magazine Dig Into History.

Contributions: David Hauka
David Hauka teaches film directing and aesthetics at Capilano University’s School of Motion Picture Arts and screen writing, scene study, and 3D/virtual environment technique for actors in the Department of Theatre and Film at the University of British Columbia. His academic research focuses primarily on the influence of religion in American horror cinema.

Contributions: Russ Hunter
Russ Hunter is a senior lecturer in film and television at the University of Northumbria. He is the coeditor of a forthcoming collection on the cinema of Dario Argento and is currently working on a monograph on the history of European horror cinema and an article exploring environmental discourses within Italian horror cinema.

Contributions: Barry C. Knowlton
Barry C. Knowlton teaches history, literature, and classics at Assumption College and has published on a wide range of subjects in the humanities.

Contributions: Eloise R. Knowlton
Eloise R. Knowlton currently serves as Dean of Undergraduate Studies at Assumption College and is the author of Joyce, Joyceans, and the Rhetoric of Citation (1998).

Contributions: Murray Leeder
Murray Leeder is an adjunct assistant professor at the University of Calgary. He is the author of Horror Film: A Critical Introduction (2018), The Modern Supernatural and the Beginnings of Cinema (2017), and Halloween (2014), as well as the editor of Cinematic Ghosts: Haunting and Spectrality from Silent Cinema to the Digital Era (2015) and Re-Focus: The Films of William Castle (2018).

Contributions: Catherine O'Brien
Catherine O’Brien is director of the Centre for Marian Studies at the University of Roehampton, London. She has published widely on the intersections between film and theology, including The Celluloid Madonna (2011) and Martin Scorsese’s Divine Comedy: Movies and Religion (2018).

Contributions: R. Barton Palmer
R. Barton Palmer is Calhoun Lemon Professor of Literature emeritus at Clemson University, where he is the founding director of the World Cinema program. Palmer is the author or editor of more than fifty books on different subjects. He is also the editor of South Atlantic Review and Tennessee Williams Annual Review. His recent film books include (with Murray Pomerance), The Many Cinemas of Michael Curtiz (2018), and (with Homer Pettey) French Literature on Screen (2019).

Contributions: Carl H. Sederholm
Carl H. Sederholm is professor of Interdisciplinary Humanities at Brigham Young University and chair of the Department of Comparative Arts and Letters. He is the editor of the Journal of American Culture and is the author of multiple essays on authors such as Edgar Allan Poe, H. P. Lovecraft, Stephen King, Jonathan Edwards, Lydia Maria Child, and Nathaniel Hawthorne. He is also coeditor (with Jeffrey Weinstock) of The Age of Lovecraft (2016), coeditor (with Dennis Perry) of Adapting Poe: Re-Imaginings in Popular Culture (2012) and the coauthor (also with Dennis Perry) of Poe, the “House of Usher,” and the American Gothic (2009).

Contributions: David Sterritt
David Sterritt is editor-in-chief of Quarterly Review of Film and Video, contributing writer at Cineaste, and film professor at the Maryland Institute College of Art. He is author or editor of fifteen books and his writing has appeared in Cahiers du cinéma, the New York Times, Hitchcock Annual, the Chronicle of Higher Education, the Journal of Aesthetics and Art History, and many other publications as well as numerous edited collections. He was film critic of the Christian Science Monitor for almost forty years, serving two terms as chair of the New York Film Critics Circle, ten years as chair of the National Society of Film Critics, and ten years as co-chair of the Columbia University Seminar on Cinema and Interdisciplinary Interpretation.

Contributions: J.P. Telotte
J. P. Telotte is a professor of film studies at Georgia Tech’s School of Literature, Media, and Communication. He is the coeditor of the journal Post Script and has published widely on film history, Disney, animation, and film genres, especially science fiction. His most recent books are Robot Ecology and the Science Fiction Film (2016), Animating the Science Fiction Imagination (2018), and Movies, Modernism, and the Science Fiction Pulps (2019).

Contributions: Jeffrey Andrew Weinstock
Jeffrey Andrew Weinstock is professor of English at Central Michigan University and an associate editor of the Journal for the Fantastic in the Arts. He has authored or edited twenty-four books, the most recent of which are The Monster Theory Reader (2019), Critical Approaches to Welcome to Night Vale: Podcasting Between Weather and the Void (2018), The Cambridge Companion to American Gothic (2018), and The Age of Lovecraft (2016). Visit him at JeffreyAndrewWeinstock.com.