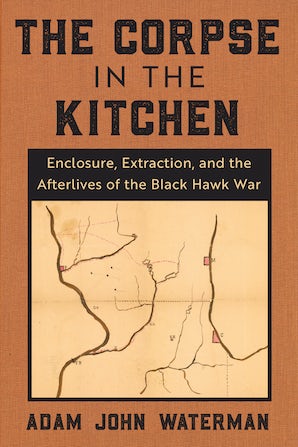 Reassessing the archive of the Black Hawk War, The Corpse in the Kitchen explores relationships between the enclosure of Indigenous land, histories of resource extraction, and the literary culture of settler colonialism. While conventional histories of the Black Hawk War have long treated the conflict as gratuitous, Adam John Waterman argues that the war part of a struggle over the dispensation of mineral resources specifically, mineral lead—and the emergence of new cultures of killing and composition. The elemental basis for the fabrication of bullets, lead drawn from the mines of the upper Mississippi, contributed to the dispossession of Indigenous peoples through the consolidation of U.S. control over a vital military resource. Rendered as metallic type, Mississippian lead contributed to the expansion of print culture, providing the occasion for literary justifications of settler violence, and promulgating the fiction of Indigenous disappearance.

Treating the theft and excarnation of Black Hawk’s corpse as coextensive with processes of mineral extraction, Waterman explores ecologies of racial capitalism as forms of inscription, documentary traces written into the land. Reading the terrestrial in relation to more conventional literary forms, he explores the settler fetishization of Black Hawk’s body, drawing out homoerotic longings that suffuse representations of the man and his comrades. Moving from print to agriculture as modes of inscription, Waterman looks to the role of commodity agriculture in composing a history of settler rapine, including literal and metaphoric legacies of anthropophagy. Traversing mouth and stomach, he concludes by contrasting forms of settler medicine with Black Hawk’s account of medicine as an embodied practice, understood in relation to accounts of dreaming and mourning, processes that are unforgivably slow and that allow time for the imagination of other futures, other ways of being.

The Black Hawk War has lent itself well to imperial forgetting. But The Corpse in the Kitchen examines how racism shaped Illinois before, during, and after the war.---David Roediger, Boston Review

1 The Indifferent Children of the Earth: Lead, Enclosure,
and the Nocturnal Occupations of the Mineral Undead | 15

2 “Dressed in a strange fantasy”: The Dialectics of Seeing and the Secret Passages of Desire | 54

3 Constantly at Their Weaving Work: Historiography and the Annihilation of the Body | 89

4 Things Sweet to Taste: Corn and the Thin Gruel of Racial Capitalism | 120

5 They Prove in Digestion Sour: Medicine, an Obstinacy of Organs, and the Appointments of the Body | 173

Conclusion: The Afterlives of the Black Hawk War | 211