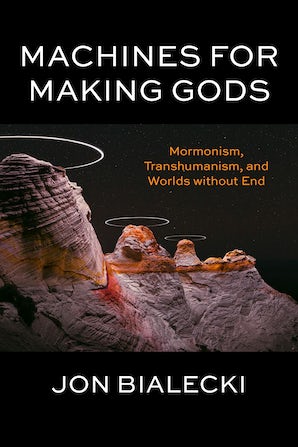 The Mormon faith may seem so different from aspirations to transcend the human through technological means that it is hard to imagine how these two concerns could even exist alongside one another, let alone serve together as the joint impetus for a social movement. Machines for Making Gods investigates the tensions between science and religion through which an imaginative group of young Mormons and ex-Mormons have found new ways of understanding the world.

The Mormon Transhumanist Association (MTA) believes that God intended humanity to achieve Mormonism’s promise of theosis through imminent technological advances. Drawing on a nineteenth-century Mormon tradition of religious speculation to reimagine Mormon eschatological hopes as near-future technological possibilities, they envision such current and possible advances as cryonic preservation, computer simulation, and quantum archeology as paving the way for the resurrection of the dead, the creation of worlds without end, and promise of undergoing theosis—of becoming a god. Addressing the role of speculation in the anthropology of religion, Machines for Making Gods undoes debates about secular transhumanism’s relation to religion by highlighting the differences an explicitly religious transhumanism makes.

Charting the conflicts and resonances between secular transhumanism and Mormonism, Bialecki shows how religious speculation has opened up imaginative horizons to give birth to new forms of Mormonism, including a particular progressive branch of the faith and even such formations as queer polygamy. The book also reveals how the MTA’s speculative account of God and technology together has helped to forestall some of the social pressure that comes with apostasy in much of the Mormon Intermountain West.

A fascinating ethnography of a group with much to say about crucial junctures of modern culture, Machines for Making Gods illustrates how the scientific imagination can be better understood when viewed through anthropological accounts of myth.

Jon Bialecki’s Machines for Making New Gods is a major work of scholarship—truly impressive in its scope, range, and depth. There’s simply no other book like it, so creative is its composition and canvas. It will force us to reconsider a lot of literature in anthropology and well beyond—on Christianity, on secularity, on media, on matter, and, perhaps above all, on the very boundaries of life.---Matthew Engelke, author of How to Think Like an Anthropologist

Bialecki takes readers through a fascinating world in a thrilling ethnographic investigation of how and why the Mormon Transhumanist Association flourishes. A brilliant tracing of the complicated kinship between religion and transhumanism, this book is more than a dive into one subgroup but rather a sophisticated theoretical analysis of conditions that make such a group possible.---Taylor Petrey, author of Tabernacles of Clay: Sexuality and Gender in Modern Mormonism

Jon Bialecki’s Machines for Making Gods: Mormonism, Transhumanism, and Worlds without End is a readable and engaging exploration of a subject that will likely surprise people by its very existence. - H-Net Reviews

Series Zero: “Children of God would try to play God” | 1

By (author) Jon Bialecki
Jon Bialecki is Lecturer in Anthropology at the University of California, San Diego. He is the author of A Diagram for Fire: Miracles and Variation in an American Charismatic Movement, which won the Sharon Stephens Prize and was a finalist for the Clifford Geertz Prize.