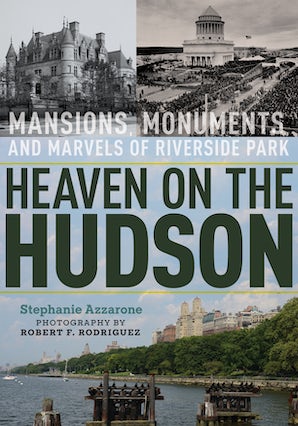 To outsiders or East Siders, Riverside Park and Riverside Drive may not have the star status of Fifth Avenue or Central Park West. But at the city’s westernmost edge, there is a quiet and beauty like nowhere else in all of New York. There are miles of mansions and monuments, acres of flora, and a breadth of wildlife ranging from Peregrine falcons to goats. It’s where the Gershwins and Babe Ruth once lived, William Randolph Hearst ensconced his paramour, and Amy Schumer owns a penthouse. Told in the uniquely personal voice of a longtime resident, Heaven on the Hudson is the only New York City book that features the history, architecture, and personalities of this often overlooked neighborhood, from the eighteenth century through the present day.

Combining an extensively researched history of the area and its people with an engaging one-on-one guide to its sights, author Stephanie Azzarone sheds new light on the initial development of Riverside Park and Riverside Drive, the challenges encountered—from massive boulders to “maniacs”—and the reasons why Riverside Drive never became the “new Fifth Avenue” that promoters anticipated. From grand “country seats” to squatter settlements to multi-million-dollar residences, the book follows the neighborhood’s roller-coaster highs and lows over time. Readers will discover a trove of architectural and recreational highlights and hidden gems, including the Drive’s only freestanding privately owned villa, a tomb that’s not a tomb, and a sweet memorial to an eighteenth-century child. Azzarone also tells the stories behind Riverside’s notable and forgotten residents, including celebrities, murderers, a nineteenth-century female MD who launched the country’s first anti-noise campaign, and an Irish merchant who caused a scandal by living with an Indian princess.

While much has been written about Central Park, little has focused exclusively on Riverside Drive and Riverside Park until now. Heaven on the Hudson is dedicated to sharing this West Side neighborhood’s most special secrets, the ones that, without fail, bring both pleasure and peace in a city of more than 8 million.

Riverside Park is the armature onto which Stephanie Azzarone has constructed a scrumptious encomium to much more than merely that elongated swathe of greenery. She has used the history of the park and its adjacent eponymous avenue to tell a much broader story of how New York and the living styles of New Yorkers have developed and changed over the decades. She relates tales both enlivening and horrifying of some of the more interesting people who have participated in the development of the Riverside Drive neighborhood and she provides a well-narrated walking tour up the Avenue. Architecture, planning, art, politics, arrogance, and present-day concerns all are part of the book’s vivid prose. With wit and delightful detail Azzarone simultaneously documents and charms.---Andrew Alpern, author of Posh Portals: Elegant Entrances and Ingratiating Ingresses to Apartments for the Affluent in New York City

Heaven on the Hudson is a fascinating account of the rise, fall, and rise again of Riverside Drive. Azzarone's deep research and skillful storytelling makes this a brisk, lively read for New York natives and out-of-towners alike.---Esther Crain, author of The Gilded Age in New York, 1870-1910

Heaven on the Hudson gives Riverside Drive, one of the world’s great thoroughfares, its due. All the beauty, all the architecture, all the notables, and all the history are offered in one book. For the local and non-local reader alike, this book is a page-turner. It surprises (even this historian) with enjoyable and fascinating details that reveal Riverside’s not-so-well known treasures. Best is that one can walk Riverside Drive with Heaven on the Hudson in hand to explore and enjoy. My high expectations for a long overdue and good book about Riverside Drive has been vastly exceeded.---Jim Mackin, author of Notable New Yorkers of Manhattan's Upper West Side: Bloomingdale-Morningside Heights

By (author) Stephanie Azzarone
Stephanie Azzarone is a native New Yorker who has lived on Riverside Drive most of her adult life. A former journalist (freelancer for the New York Times and New York magazine, among others), she also ran an award-winning Manhattan public relations agency. Currently, she is studying for her tour guide certification to share her knowledge of Upper West Side life along the Hudson River with natives and tourists alike.