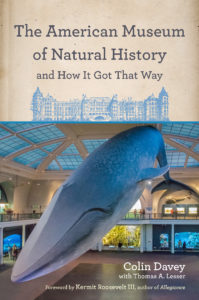 It’s one of the top 5 most-visited museums in New York City. Every year, nearly 5 million people take in fascinating exhibits on animals and artifacts from around the world and throughout history, vast information regarding space, geological and ecological wonders, and of course, dinosaurs!

The American Museum of Natural History is one of New York City’s most beloved institutions, and one of the largest, most celebrated museums in the world. Since 1869, generations of New Yorkers and tourists of all ages have been educated and entertained here. Located across from Central Park, the sprawling
structure, spanning four city blocks, is a fascinating conglomeration of many buildings of diverse architectural styles built over a period of 150 years.

In THE AMERICAN MUSEUM OF NATURAL HISTORY AND HOW IT GOT THAT WAY (Fordham University Press/Empire State Editions Hardcover; $34.95; May 14, 2019), scientist and writer Colin Davey shares the rich history of this New York landmark. This is the first book to chronicle the museum’s evolution – from the selection of a desolate, rocky, hilly, swampy site, known as Manhattan Square to the present day.

Author Colin Davey spent much of his childhood literally and figuratively lost in the museum’s labyrinthine hallways. As an adult, this sparked his curiosity to better understand the museum’s physical structure and to contextualize the museum’s place within American history and the history of science. In THE AMERICAN MUSEUM OF NATURAL HISTORY AND HOW IT GOT THAT WAY, you will learn:

• The origins of the museum during the earliest days of Central Park, including the roles of Andrew Haswell Green, known as the Father of New York City, and the notoriously corrupt William “Boss” Tweed.
• The story of Carl Akeley, the museum’s African explorer who designed the museum’s iconic Akeley African Hall--including the architecture, taxidermy and diorama techniques -- and who died during one of his many African expeditions hunting specimens for the hall.
• The role of President Theodore Roosevelt, from his boyhood, hunting elephants in Africa with Carl Akeley, through the creation of the Memorial Hall built in his honor facing Central Park.
• The evolution of the museum’s fabled dinosaur exhibits from the earliest days of dinosaur paleontology to the present day.
• The role of New York power broker Robert Moses in the creation of the Hayden Planetarium.
• The detailed history of the Hayden Planetarium, the creation of the Rose Center for Earth and Space, and new plans for the Gilder Center for Science, Education, and Innovation.

Richly illustrated with period photos, THE AMERICAN MUSEUM OF NATURAL HISTORY AND HOW IT GOT THAT WAY is based on deep archival research. This invaluable book will not only help readers navigate the museum’s great exhibition halls, it will enhance their entire museum experience.

ABOUT THE AUTHOR
Colin Davey’s life was shaped by frequent visits to the American Museum of Natural History and the Hayden Planetarium as a child. He is a scientist, software engineer, martial artist, and author of Learn Boogie Woogie Piano (Boogie Woogie Press, 1998). A native New Yorker, Colin currently resides in
Oregon, but he returns frequently to New York City and visits the American Museum of Natural History whenever he is in town.

Thomas A. Lesser was Scientific Assistant and Intern Astronomer (1974–76) and Senior Lecturer (1975– 2) at the Hayden Planetarium. He has also held several positions at the American Museum of Natural History, including Manager of Development.

If you would like to receive a review copy or schedule an interview, please contact Jennifer Richards at Over the River Public Relations: 201-242-9637, [email protected].