The Author’s Corner with Tom Glynn 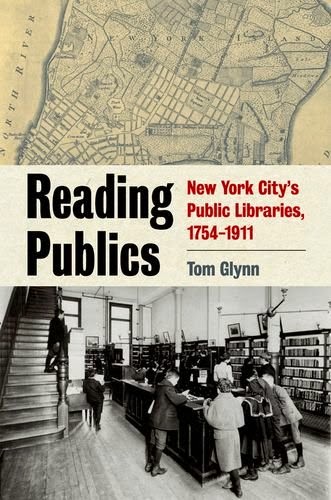 JF: What led you to write Reading Publics?

TG: I came to the history of American libraries by way of American labor history. My first article was on the Apprentices’ Library of the City of New York. That led to research on other libraries in the city in the nineteenth century and prompted me to explore what they held in common, what goals and values the Apprentices’ Library shared with, for example, the Mercantile Library Association, a library for young clerks. The book really began to take shape when I started to think about the contemporary use of the term public library to refer to these privately funded, privately managed institutions.

JF: In two sentences, what is the argument of Reading Publics?

TG: The early history of public libraries in New York City is an important part of the social and cultural history of the United States, revealing critical shifts in how Americans defined the public, the public good, and public institutions. It is also an important part of the history of books and reading, shedding light on the relationship between the market and culture, the reception of popular fiction, and class and gender in the construction of the reader.JF: Why do we need to read Reading Publics?

TG: Histories of public libraries in the United States omit or gloss over the fact that the meaning of the term changed over time, that public library meant something quite different to a reader in 1754 than to a reader in 1911. Reading my book you will appreciate the shifts from the eighteenth to the twentieth century in how Americans defined and what they expected of public institutions and what was valued as a public good. You will also learn about the history of books and reading in America and how class, gender and the market shaped the construction of the reader. Reading Publics addresses the need to place the development of public libraries within the larger context of American social and cultural history. But it is also a New York story, an accessible, interesting narrative of a little-know aspect of the city’s past. It was written not just for scholars, but for anyone interested in history, books, and libraries.

JF: When and why did you decide to become an American historian?

TG: I became a librarian before I became an historian. After I started my first job in an academic library, I joined a Ph.D. program, in part for the challenge and in part to be a better librarian. Later I wrote a book on the history of early public libraries in New York City for essentially the same reasons.

JF: What is your next project?

TG: I’m not sure. I’m very interested in the history of reading and also in detective fiction in the nineteenth and early twentieth centuries. It would be fun to find something that combines those interests.

Posted Thursday, February 12, 2015 by John Fea at  The Author’s Corner