In an era where many political processes, structures, and democracy itself are being called into question, Dr. John D. Feerick provides an unbiased, thorough analysis of the strengths and weaknesses of the Twenty-Fifth Amendment in his book, The Twenty-Fifth Amendment: Its Complete History and Applications, published by Fordham University Press. Ratified in 1967, this amendment resolves many of the problems of presidential succession but has been criticized for being undemocratic and ambiguous. Time Magazine writes that in a political world where the preposterous has become reality, officials of the Trump administration should brush up on their constitutional history. 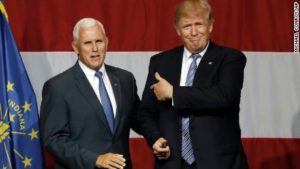 “He couldn’t have put it more plainly. On April 13, 1965, in the midst of a congressional debate over the proposed 25th Amendment to the Constitution dealing with presidential succession and incapacity, the chairman of the House Judiciary Committee, Representative Emanuel Celler of New York, dispensed with high-minded legal arguments. They were there, Celler said, to figure out what might be done if the unthinkable–a deranged American President with nuclear weapons–became thinkable. “The President may be as nutty as a fruitcake,” Celler declared on the House floor. “He may be utterly insane.” And for this reason, America needed a plan.

Ratified two years later, the amendment offered the country just that. And now, half a century on, the subject of whether President Donald Trump could face a removal from power under its terms is one of an ever widening conversation. “The 25th Amendment is a concept that is alive every day in the White House,” said Michael Wolff, author of Fire and Fury: Inside the Trump White House, on NBC’s Meet the Press. White House officials have strongly denied this–but, as ever, the President himself has managed to keep the issue alive by tweeting about his mental stability.

President John F. Kennedy with his Vice President, Lyndon B. Johnson. When Kennedy was assassinated, the 25th Amendment was utilized and Johnson was sworn immediately on a plane. Image courtesy of the U.S. Department of State.

Is the 25th Amendment chatter simply a liberal fantasy? A #resistance fever dream? Political porn for wonks? Almost certainly, but we live in a world in which the outlandish (a President Trump) became a reality, so who’s to say where our political melodrama will end? It’s highly unlikely, but this unprecedented presidency could lead to unprecedented constitutional ground: the invocation of the boring-sounding yet world-shaking Section 4 of the 25th Amendment–a provision that enables the Vice President, with a majority of members of the Cabinet, to declare the President unable to discharge his duties, thus installing the Vice President as acting President pending a presidential appeal to, and vote by, the Congress.”

The first three sections of the twenty-fifth amendment cover presidential succession and the appointment of a new vice president in the case of death or resignation. Presidents such as Eisenhower, Franklin D. Roosevelt, and John F. Kennedy all experienced serious physical illnesses or debilitation, and the thought of a disabled president became more concerning as the threat of nuclear war increased. Section 4 of the amendment explains the steps that must be taken if a President is deemed by the Vice President and the Cabinet to be unfit for the duties of the office. It is vague and largely untested. 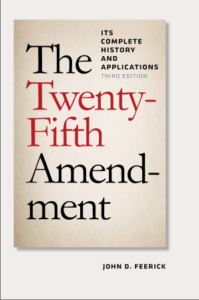 “Section 4 is where things really get interesting. That provision, wrote John D. Feerick, a legal scholar and a key architect of the amendment, “covers the most difficult cases of inability–when the President cannot or refuses to declare his own inability.” The modern framers contemplated nightmare scenarios as they drafted the amendment, including, Feerick recalled, “situations where the President might be kidnapped or captured, under an oxygen tent at the time of enemy attack, or bereft of speech or sight.” One Section 4 scenario: an emergency medical situation during which the President was unconscious or disabled for a period of time (a coma, for instance). It was clear from the debates at the time of adoption and ratification, according to Feerick, that “unpopularity, incompetence, impeachable conduct, poor judgment and laziness do not constitute an ‘inability’ within the meaning of the amendment.”

As media outlets and ordinary citizens alike continue to criticize President Trump’s brusque persona and question his mental stability, Dr. Feerick’s distinction between incompetence and inability grows more important than ever. Are these simply hyperbolic statements of frustration, or will a greater constitutional mechanism need to be invoked? Either way, Meacham writes, politicians should make themselves familiar with the twenty-fifth amendment, in case it must be utilized.