From recent gun control activist efforts to the Women’s March, protesters and advocates everywhere are asking for a more intersectional approach to social change. In general, people of color endure a disproportionate amount of violence and disadvantages compared to their white counterparts, and a focus on intersectionality would take these different social experiences into account. 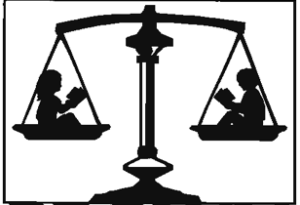 There are few places more important, formative, and contentious for intersectionality than the classroom. From early childhood to graduate school, holistic education with access to resources is key to development. In fact, Brookings argues that the American Dream has shifted- rather than relying on “good hard work” to make a living, most Americans now see a good education as pivotal to success. Black students and white students test at similar levels in early education, but as they work their way through the school system a disparity emerges, according to a report from the Hamilton Project. While a significant portion of Americans think that race has become a non-issue, educational segregation has been steadily on the rise since the 1980s. Black students also have less access to veteran teachers and are expelled more often than their white peers. A study from the Pew Research Center shows that black men who attended college were more likely to say they faced discrimination, which indicates that higher education helps raise awareness about race issues but can also be an isolating experience for many people. So what about the American education system is perpetuating racism and leaving students of color behind?

The upcoming release Education at War: The Fight for Students of Color in America’s Public Schools from Fordham University Press argues that disenfranchisement in education is a unique confluence of racism, militarism, carcerality, and neoliberal economic principles.

“Written from the perspectives of education practitioners and scholars who have personal histories with global war via (settler) colonialism, immigration, and subsequent disenfranchisement in the United States,  Education at War addresses the vestiges of war that shape the lives of youth of color. 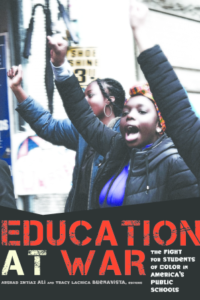 This thought-provoking collection of essays reveals how the contemporary specter of war has become a central way that racism and materialism are manifested and practiced within education. Education at War asserts that the contemporary neoliberal characterization of education and school-based reform is situated within the global political economy that has facilitated growth in the prison and military industrial complex, and simultaneous divestment from education domestically…They place war, surveillance, and carcerality at the center of critical race analysis in education.”

Rather than viewing education as one component of racial inequality or vice versa, Education at War paints a picture of an education system challenged on all sides by countless socio-political forces. Editors Arshad Imtiaz Ali and Tracy Lachica Buenvavsita have compiled a unique collection of essays that can act as a resource to help teachers, activists, scholars, and ordinary citizens unpack the layers of American society that contribute to educational and racial inequality. As intersectionality becomes a more and more prominent buzzword in media and academic discourse, a thorough analysis of its relationship to American politics and education is a necessary endeavor on the path to effecting change.