“When there really is a danger that must be faced in order to survive…there is a strong incentive for action, dedication and surpassing oneself.”—Anne Dufourmantelle

In 2017, French author, philosopher, and psychoanalyst Anne Dufourmantelle died trying to save two children from hazardous water conditions at a beach in the south of France. The children were rescued by lifeguards, but Dufourmantelle drowned and could not be resuscitated. 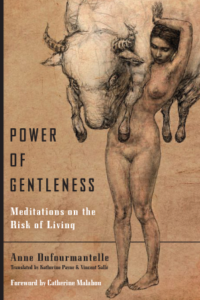 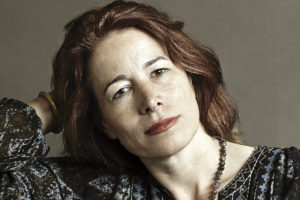 Immediately, news outlets connected the dots between Anne’s heroic death and her publication, “Éloge du Risque” (“In Praise of Risk”). Everyone praised her death as a final testament to her bold philosophy, that living life is inherently fraught with risk. As Dufourmantelle said in an interview in 2015, “When one admits his fear, his finitude, a confidence can be reborn from this vulnerability…Being alive is a risk. Few beings are.”

Despite their evocative connection between her life’s work and her final moments, these media stories missed a core part of Dufourmantelle’s philosophy. Her work In Praise of Risk is inextricably connected to one of her most famous writings, Power of Gentleness: Meditations on the Risk of Living. Her philosophy is not about throwing caution to the wind for bold actions of heroism, but about embracing gentleness as an active passivity that can create ethical and political change. Gentleness is a way to transform our relationship with fear and the sensory world into a resource for symbolic resistance; by approaching risk and danger with gentleness, we transform even the most vulnerable, difficult situations into moments filled with intangible magic and life.

She clarifies that gentleness is not, as we have been taught, a “diluted form of mawkishness…In the name of our highest values—happiness, truth, security—we enforce “gentle” safeguards against hurt and are persuaded to participate in our era’s three divinities: efficiency, speed, and profitability. But in doing so we seal ourselves off from the life-affirming gamble that a true gentleness affords.” To embrace the power of gentleness, we need to reexamine our societal conceptions of what it means to be a gentle person and transform this into a powerful, rather than passive, identity.

This edition of Power of Gentleness: Meditations on the Risk of Living from Fordham University Press, winner of the French Voices Award for excellence in publication and translation, personifies Dufourmantelle’s philosophy on the cover as a woman lifting a strong bull. For Dufourmantelle, gentle qualities that are often considered feminine and passive, such as protectiveness or nurturing, can be transformed into primary, radical actions. In this way, Dufourmantelle’s death did embody her philosophy: she swam out to save children, in a powerful act of care rather than a defiance of risk for its own sake.

As a testament to Dufourmantelle’s work and her death, Fordham University Press will be releasing a new translation of In Praise of Risk in Fall 2018.

On the heels of the #MeToo and #TimesUp movements, Women’s History Month has a unique force behind it this year. Dufourmantelle’s death and philosophy are powerful reminders of the importance of liberating oneself from fear and embracing gentleness as a powerful tool to create change, politically and personally. Her writing, based in psychoanalytic case studies, philosophy, and politics, encourages us to took at the intersectionality of gentleness and see how embracing risk and vulnerability can be the key to truly living.