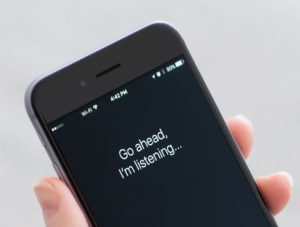 Have you ever been talking to a friend about planning a trip to somewhere warm and tropical, and suddenly when you log onto your computer you are bombarded with travel ads for Hawaii and Bermuda? Even for post-millennials, who have largely grown up around “smart” technology, the thought that Siri or Alexa is always listening unnerves quite a few people.

Advertising is nothing new, but technological developments have made it easier for firms to market products within the sphere of our personal lives. In a world that has transitioned from billboards to push notifications, we find ourselves constantly tied to advertising, especially when we consider that the devices we depend on–cell phones, computers, cars–are consumer objects themselves. Beyond that, the rise of memes and emojis shows that humans have an innate attraction to images as a means of communication: brightly colored pictures packed full of meaning allow us to convey many ideas with surprising detail and subtlety. 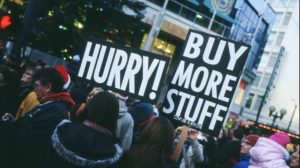 This rising tide of technology, advertising, and stimulation certainly has many people worried. According to the American Psychological Association, the modern world constantly asks us to exercise our willpower and, like a muscle, our ability to resist temptation slowly weakens, leading to more shopping and indulgence. Amitai Etzioni, a professor at George Washington University, argues that consumerism is a major driver of economic crisis, encouraging people to buy beyond their means, accumulate debt, and work slavish hours to attain “the good life.” Beyond financial distress, studies show constant sensory overload can even lead to ADHD in children.

But what if, as Emanuele Coccia argues in Goods: Advertising, Urban Space, and the Moral Law of the Image (Fordham University Press 2018), we stop fighting the idea that consumerism and advertising are evil and look at how the objects and images we surround ourselves with shape our moral existence? 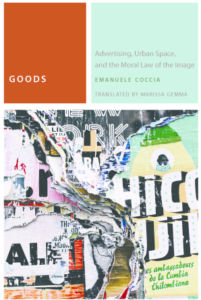 Objects are all around us—and images of objects, advertisements for objects. Things are no longer merely purely physical or economic entities: within the visual economy of advertising, they are inescapably moral. Any object, regardless of its nature, can for at least a moment aspire to be “good,” can become not just an object of value but a complex of possible happiness, a moral source of perfection for any one of us.

When we acknowledge that our notion of “the good” resides within a world of things, we must grant that in advertising, humans have revealed themselves as organisms that are ethically inseparable from the very things they produce, exchange, and desire. In the advertising imagination, to be human is to be a moral cyborg whose existence attains ethical perfection only via the universe of things. The alienation commodities cause and express is moral rather than economic or social; we need our own products not just to survive biologically or to improve the physical conditions of our existence, but to live morally.

For Coccia, objects and images are not reminders of the burden of consumerism but tools to build a political and social life that transcends legal tradition. For him, “Advertising and fashion are just the primitive, sometimes grotesque, but ultimately irrepressible prefiguration of the new politics.”

“This short, unsettling book offers new perspectives on the moral place of things in the cosmology of industrial modernity. In making his radical argument, Coccia questions many of our habits of thought, by showing that the love of things—crystallized in fashion, advertising and consumption—reflects a search for a form of political normativity which has for too long been seen as illicit, illusory and immoral.”– Arjun Appadurai, New York University

The love of things is often demonized, especially as we navigate the relationship between modern industrial society and the post-modern urge for the natural and emotional. Just because objects, images, and ads are subtextually seen as “crude,” because they urge us to buy something, does not mean they do not express deeper political or social desires. Rather than seeing consumerism or advertising as a loss of control, Coccia posits that it is really humanity exercising its ability to express its own politics and morality. While Coccia certainly does not promote unbridled, heedless, consumerism, he urges us to recognize how objects allow us to create political and ethical realities that convey who we are and what matters to us: like an image of a hammock on a tropical beach, when we’re stuck in the office on a dreary March afternoon.