New York After 9/11 probes the question that New York asks every September—how do we heal?

An estimated 2 billion people around the world watched the catastrophic destruction of the World Trade Center. The enormity of the moment was immediately understood, and both news coverage and history of the catastrophe quickly took on global proportions—less understood has been the effect on the locus of the attacks, New York City, not as a seat of political or economic power, but as a community; not in the days and weeks afterward, but in the months and years. This period of tumultuous change offers important insights about New York today and holds important lessons for the future. 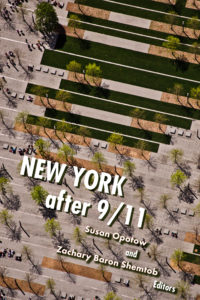 New York after 9/11 offers insightful and critical observations about the processes set in motion by September 11, 2001. It brings together credible experts from diverse fields to discuss the long-term recovery of New York City after 9/11. Editors Susan Opotow and Zachary Baron Shemtob collect the work of experts in architecture and design, medicine, health, community advocacy, psychology, public safety, human rights, law, and mental health to look back on the aftereffects of that tragic day in key spheres of life in New York City. With a focus on the themes of space and memory, public health and public safety, trauma and conflict, and politics and social change, this comprehensive, respectful account of how 9/11 changed New York sets out to answer three questions: What were the key conflicts that erupted in 9/11’s wake? What clashing interests were involved and how did they change over time? And what was the role of these conflicts in the transition from trauma to recovery for New York City as a whole?

On the 17th anniversary of the attacks, editor Susan Opotow sat down to speak with The Graduate Center, CUNY. Read the interview.

The chapter, Conflict and Change: New York City’s Rebirth after 9/11 is available for download.