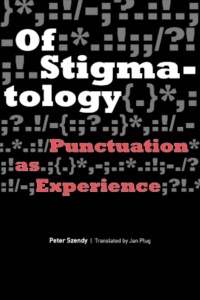 “Szendy’s brilliant reflections on the punctuation of experience make for a magnificent composition: a new philosophy of the sensible focused on how one feels oneself feeling, and an investigation of ‘how one makes a point’ philosophically and emotively. Never before have exclamation points, dashes, interrogatives, full stops, and quotation marks been treated so existentially; never before has the musicality of existence been so keenly tied to its notation; never before has the distance between points been used so effectively as a measure of life-span. In the “pows!” and “blams” of comic-book blows, glimmers of political violence come into focus. An amazing work of philosophy, aesthetics, media, and critique!!!”—Emily Apter, New York University

“…Cuts, blows, silences, blanks: these stigmata are all irreducible, as are punctuation marks in a text. From ontology to linguistics, from learned treatise to comic book, the grace of this fascinating text brings being back to the infinity of its cut.”—Catherine Malabou, Kingston University

Through the ample examples of film, literature, philosophy, and even medicine, Of Stigmatology imaginatively follows of the various ways in which punctuation both punctures and sutures language. Addressing all kinds of punctuating effects as a technology of meaning, author Peter Szendy studies the repertory of punctuation marks in all their arrangements and all their combinations, including the most complex or contradictory ones, and even in their so-called pure or absolute usages, isolated, without either words or phrases that carry them.

This often witty meditation combines formal analysis with wide reading in a fascinating set of insights. Punctuated throughout not only with the common punctuating marks but with everything from smileys to movie stills and images from graphic novels, Of Stigmatology is itself the performance of the general theory of punctuation, of the stigmatology, whose elaboration it at
once calls for and traces.