Behind Maine’s breezy coastlines, majestic mountains, and lush wildlife lies a scathing and painful past. The story of the displaced peoples of Malaga Island is one that is hauntingly illustrated in Julia Bouwsma’s Midden. Bouwsma beautifully gives a voice to those that were silenced by a racist state once obsessed with eugenics, committing horrific crimes against humanity to the sole inhabitants of the a small, coastal island at the mouth of the New Meadows River. 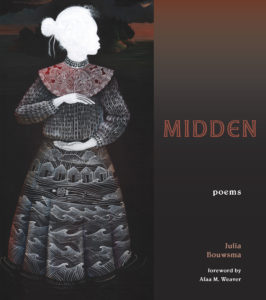 In the early 1900s, racist politicians and greedy developers worked together to successfully wipe out the forty-five inhabitants, who were mostly white or African diaspora, through mass sterilization, forced displacement of the living, and an eradication of burial grounds. In present day, we have the words of artists like Bouwsma, that when combined with findings from archaeological excavations beginning in the early 2000s, allow us to shed light on the lives, and untimely deaths, of the Malaga peoples, who are no longer silenced.

Midden has received numerous accolades from respected organizations and individuals, such as being selected as one of NPR’s Best Books of 2018, or a feature on Book Riot as one of 2019’s Must-Read Poetic Works. Bouwsma’s poetry has received stellar reviews for its “chilling commentary, [which is] compassionate and character driven” (Patricia Smith) and for its use of “lyric, persona, and lyric narrative to investigate these histories of violent displacement, gentrification, and incarceration” (Aracelis Girmay).

To learn more about the history of Malaga Island and its peoples, click here.