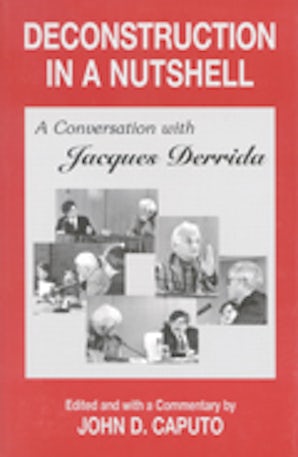 A Conversation with Jacques Derrida

Responding to questions put to him at a Roundtable held at Villanova University in 1994, Jacques Derrida leads the reader through an illuminating discussion of the central themes of deconstruction. Speaking in English and extemporaneously, Derrida takes up with unusual clarity and great eloquence such topics as the task of philosophy, the Greeks, justice, responsibility, the gift, the community, the distinction between the messianic and the concrete messianisms, and his interpretation of James Joyce. Derrida convincingly refutes the charges of relativism and nihilism that are often leveled at deconstruction by its critics and sets forth the profoundly affirmative and ethico-political thrust of his work. The “Roundtable” is marked by the unusual clarity of Derrida’s presentation and by the deep respect for the great works of the philosophical and literary tradition with which he characterizes his philosophical work.

The Roundtable is annotated by John D. Caputo, the David R. Cook Professor of Philosophy at Villanova University, who has supplied cross references to Derrida’s writings where the reader may find further discussion on these topics. Professor Caputo has also supplied a commentary which elaborates the principal issues raised in the Roundtable.

In all, this volume represents one of the most lucid, compact and reliable introductions to Derrida and deconstruction available in any language. An ideal volume for students approaching Derrida for the first time, Deconstruction in a Nutshell will prove instructive and illuminating as well for those already familiar with Derrida’s work.

“One of the most comprehensive and valuable interpretations of deconstruction to date. Highly recommended. . . .” - —Library Journal

Edited: John D. Caputo
John D. Caputo, the Watson Professor of Religion Emeritus (Syracuse University) and the Cook Professor of Philosophy Emeritus (Villanova University) is a constructive theologian who works in the area of “weak” or “radical” theology. His majors works include Radical Hermeneutics (1987), The Prayers and Tears of Jacques Derrida (1997), The Weakness of God (2006). His most recent works are Hermeneutics: Facts and Interpretation in the Age of Information (2018) and a second edition of On Religion (2018). The Essential Caputo (2018) a collection of his work from the early 1970s on. His latest books is Cross and Cosmos: A Theology of Difficult Glory (2019). He has addressed more general audiences in books like What Would Jesus Deconstruct? (2006) and Hoping against Hope (2015).

By (author) Jacques Derrida
The late Jacques Derrida was the single most influential voice in European philosophy of the last quarter of the twentieth century. His Athens, Still Remains, The Animal That Therefore I Am, Sovereignties in Question, and Deconstruction in a Nutshell have been published by Fordham University Press.

A Conversation with Jacques Derrida