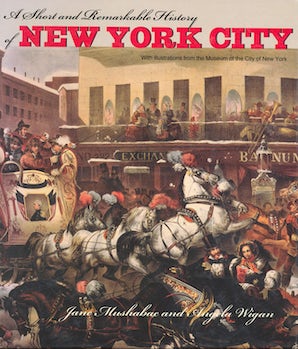 A Short and Remarkable History of New York City

NOW in its fifth Printing which includes the events of September 11, 2001.

Interesting fact-nuggets, beaded with lively commentaries and images, make for a handy, instructive, and entertaining time line of New York's history.---—Mike Wallace, co-author of Gotham: A History of New York City to 1898, winner of the 1999 Pulitzer Prize

This deft and deligtful sprint through New York City's history is filled with key facts, remarkable curiosities, strong viewpoints and fabulous illustrations. The result is an irresistible compendium for Gotham mavens and newcomers alike.---—Phillip Lopate, editor of Writing New York: A Literary Anthology (Library of America)

“A smart and stylish highlight history of the world’s greatest city.”---—John Jakes, author of the North and South Trilogy and American Dreams

By (author) Jane Mushabac
Jane Mushabac has written a book on Herman Melville. Her work has appeared in the Village Voice and other periodicals, and she has been a Harvard University fellow. She is a professor at New York City College of Technology, CUNY.

By (author) Angela Wigan
Angela Wigan has written book reviews for Time magazine and other publications. She is a graduate of Columbia University's Oral History Program.