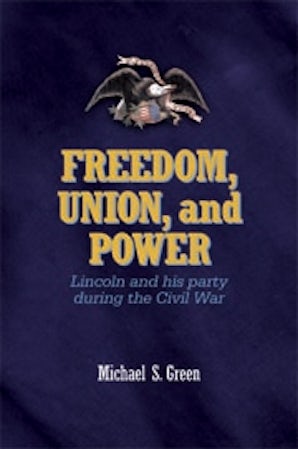 Lincoln and His Party in the Civil War

Freedom, Union, and Power analyzes the beliefs of the Republican Party during the Civil War, how those beliefs changed, and what those changes foreshadowed for the future. The party's pre-war ideology of "free soil, free labor, free men" changed with the Republican ascent to power in the White House. With Lincoln's election, Republicans faced something new-responsibility for the government. With responsibility came the need to wage a war for the survival of that government, the country, and the party. And with victory in the war came responsibility responsibility for saving the Union-by ending slavery-and for pursuing policies that fit into their belief in a strong, free Union.

Michael Green shows how Republicans had to wield federal power to stop a rebellion against freedom and union. Crucial to their use of federal power was their hope of keeping that power-the intersection of policy and politics.

Green's explanation of what united most Republicans into a functioning party is a valuable addition to the literature on Civil War politics... - —Indiana Magazine of History

Useful to anyone interested in the complexities of Civil War politics."

"Useful for dipping into research on various topics

Green provides a lucid description and explanation of the new appointments to the Supreme Court, which was transformed from the infamous Taney Court during the war. - —Civil War History

Useful to anyone interested in the complexities of Civil War politics."

"Useful for dipping into research on various topics