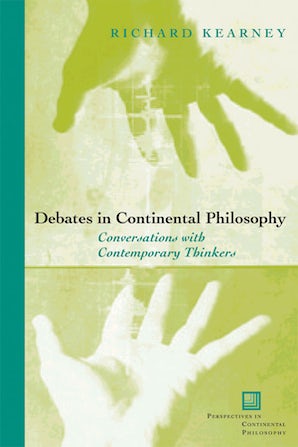 This important book brings together in one volume a collection of illuminating encounters with some of the most important philosophers of our age-by one of its most incisive and innovative critics.

For more than twenty years, Richard Kearney has been in conversation with leading philosophers, literary theorists, anthropologists, and religious scholars. His gift is eliciting memorably clear statements about their work from thinkers whose writings can often be challenging in their complexity.

Wide-ranging and accessible, these interviews provide a fascinating guide to the ideas, concerns, and personalities of thinkers who have shaped modern intellectual life. This book will be an essential point of entry for students, teachers, scholars, and anyone seeking to understand contemporary culture.

Kearney's ability to enter into the thought of such a variety of figures...while at the same time critically engaging it is of the highest order and a valuable resource for anyone interested in these postmodern questions and thinkers. - —Religion and the Arts

By (author) Richard Kearney
Richard Kearney is Charles Seelig Chair of Philosophy at Boston College and author and editor of more than forty books on contemporary philosophy and culture. He is founding editor of the Guestbook Project and has been engaged in developing a postnationalist philosophy of peace and empathy over several decades. His most relevant books on this subject include Strangers, Gods and Monsters (2001), Postnationalist Ireland (1998), Hosting the Stranger (2012), Phenomenologies of the Stranger (2010), Imagination Now (2019), and Touch: Recovering Our Most Vital Sense (2021).