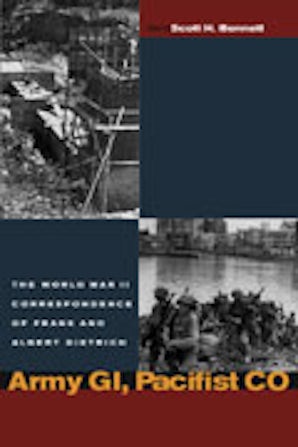 Frank and Albert Dietrich were identical twins whose lives took very different
directions during World War II. Drafted into the Army Air Corps and trained as
a radio operator, Frank was shipped to the Philippines in 1945, where as a sergeant
in the Fifth Air Force he prepared for the invasion of Japan. Albert, a pacifist,
struggled mightily to become a conscientious objector and spent two years
building dams, saving farmland, and helping the poor at Civilian Service Camps
in South Dakota, Iowa, and Florida.

Raised in a close, religious, Pittsburgh family, Frank and Albert were inseparable as
boys, sharing a strong social conscience. Divided by war, they kept in touch by
writing hundreds of letters to each other. The correspondence concerns everything
from the daily drudgery of service—loneliness, lousy food—to heartfelt debates
about war, peace, and patriotism.

This absorbing selection of letters offers fresh perspectives on the American
experience during World War II. The first published correspondence between
GI and CO brothers, the letters are an uncommonly articulate chronicle of military
service and life on the home front, including GI marriage and parenthood. Back
and forth, Frank and Albert also argued about the uses of armed force and pacifist
nonviolence in the face of fascism and Nazism.

Frank Dietrich’s letters from Manila are vivid descriptions of a liberated city under
an uneasy occupation. Albert provides an insider’s view of the pacifist experience,
especially the protracted efforts pacifists often had to wage to obtain CO status.
Together, the letters bring to life different ways Americans chose to serve their
country during one of its most dangerous and demanding times.

The book provides an important window into the mind of a true conscientious objection. - —La Junta Tribune Democrat

Bennett provides a capsule biography of the Dietrich brothers and discusses the role that non combatant GIs played in the U.S. military. He offers a neglected perspective on conscription, pacifism, conscientious objection and dissent during the "good war. - —Atlantic Highlands Herald

A close and intimate look at the experiences — and sharply differing perspectives — of identical twins whose lives diverged dramatically during World War II... - —Ocean County Observer

Rich in fascinating details and documentation related to social history as well as public policy issues on the status and contributions of conscientious objectors. - —H-Peace

The story of the Dietrich twins is especially significant as both men served our country while maintaining their ideals and bond as brothers. - —Atlantic Highlands Herald

. . . One of the book's central themes is the tenacity of love and respect even in the face of significant disagreement on fundamental issues. - —Peace & Change