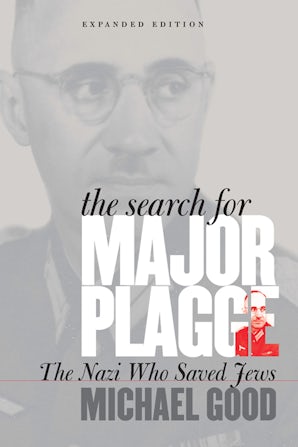 The Search for Major Plagge

When The Search for Major Plagge was published last spring, the world finally learned about a unique hero—and about one American doctor’s extraordinary journey to tell Karl Plagge’s story.

Part detective story, part personal quest, Michael Good’s book is the story of the German commander of a Lithuanian work camp who saved hundreds of Jewish lives in the Vilna ghetto —including the life of Good’s mother, Pearl. Who was this enigmatic officer Pearl Good had spoken of so often?

After five years of research—interviewing survivors, assembling a team that could work to open German files untouched for fifty years, following every lead he could, Good was able to uncover the amazing tale of one man’s remarkable courage. And in April 2005 Karl Plagge joined Oskar Schindler and 380 other Germans as a “Righteous among Nations,” honored by the State of Israel for protecting and saving Jewish lives during the Holocaust.

This expanded edition features new photographs and a new epilogue on the impact of the discovery of Karl Plagge—especially the story of 83-year-old Alfons von Deschwanden, who, after fifty years of silence, came forward as a veteran of Plagge’s unit. His testimony is now part of this growing witness to truth.

Authors & Distributors
Michael Good has appeared on C-SPAN, as a speaker in Israel and Germany, and in schools, libraries, churches, and synagogues across the United States. Plagge’s story was tracked by media around the world and can also be explored at www.searchformajorplagge.com. Good, a physician, continues to follow and develop the Plagge story from his home in Durham, CT.
Reviews

“A poignant and powerful story. . . . [Good’s] portrait is vivid; his questions compelling. His answers only deepen the mystery of goodness and its meaning in our age.” - —Michael Berenbaum, Director, the Sigi Ziering Institute: Exploring the Ethical and Religious Implications of the Holocaust, Los Angeles

“This is an exceptional story of one man’s bravery and compassion in a world where six million Jews were murdered.” - —Booklist

This book is a personal quest, personal journey, and a personal history. - —Jewish Book World

We need to listen to the story of Major Karl Plagge. . .who redeemed the name of human being in the time of darkness. - —Rabbi Jack Riemer, South Florida Jewish Journal

Inspiring . . . are the faithful efforts of the book's author, Dr. Michael Good, a Connecticut physician, whose mother Pearl and her family were mong Major Plagge's (more than 250) lucky saved souls, in tracing an unlikely Nazi's life and assuring the rightful recognition of a mensch who was too humble to acknowledge his own uniqueness. - —Rabbi Israel Zoberman, Southeastern Virginia Jewish News

...unprecedented insights into the burden of silent memories and a disastrous heritage of guilt. - —Edith Wyschogrod

In this gripping, emotional work, Good explores the life and legacy of a mysterious German officer who secretly defied his government to save Lithuanian Jews during the Holocaust. - —Matthew Engelhardt, Middletown Press

The Good Nazi - Trailer on Vimeo

By (author) Michael Good
Michael Good has appeared on C-SPAN, as a speaker in Israel and Germany, and in schools, libraries, churches, and synagogues across the United States. Plagge’s story was tracked by media around the world and can also be explored at www.searchformajorplagge.com. Good, a physician, continues to follow and develop the Plagge story from his home in Durham, CT.