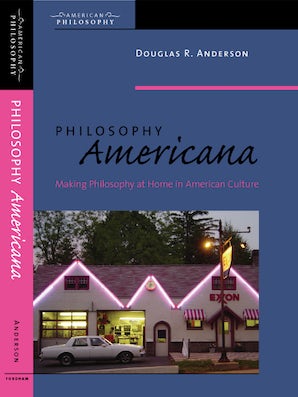 In this engaging book, Douglas Anderson begins with the assumption that philosophy—the Greek love of wisdom—is alive and well in American culture. At the same time, professional philosophy remains relatively invisible.

Anderson traverses American life to find places in the wider culture where professional philosophy in the distinctively American tradition can strike up a conversation. How might American philosophers talk to us about our religious experience, or political engagement, or literature—or even, popular music?

Anderson’s second aim is to find places where philosophy happens in nonprofessional guises—cultural places such as country music, rock’n roll, and Beat literature. He not only enlarges the tradition of American philosophers such as John Dewey and William James by examining lesser-known figures such as Henry Bugbee and Thomas Davidson, but finds the theme and ideas of American philosophy in some unexpected places, such as the music of Hank Williams, Tammy Wynette, and Bruce Springsteen, and the writings
of Jack Kerouac.

The idea of “philosophy Americana” trades on the emergent genre of “music Americana,” rooted in traditional themes and styles yet engaging our present experiences. The music is “popular” but not thoroughly driven by economic considerations, and Anderson seeks out an analogous role for philosophical practice, where philosophy and popular culture are co-adventurers in the life of ideas. Philosophy Americana takes seriously Emerson’s quest for the extraordinary in the ordinary and James’s belief that popular philosophy can still be philosophy.

Anderson's book has the distinct virtue of inviting serious questions and promising a good argument. - —Journal of American Studies Association of Texas

This sprawling work devotes several chapters to American philosphers . . . [but] also devotes chapters to visionary environmentalist Henry Bugbee and to Thomas Davidson, the founder in 1899 of the Breadwinners' College. . . Recommended. - —Choice

. . . Aims to illuminate what is distinctive about American thought . . . - —American Studies