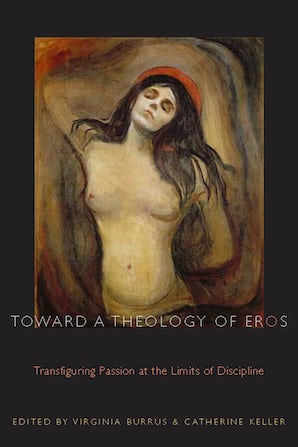 What does theology have to say about the place of eroticism in the salvific transformation of men and women, even of the cosmos itself? How, in turn, does eros infuse theological practice and transfigure doctrinal tropes? Avoiding the well-worn path of sexual moralizing while also departing decisively from Anders Nygren’s influential insistence that Christian agape must have nothing to do with worldly eros, this book explores what is still largely uncharted territory in the realm of theological erotics. The ascetic, the mystical, the seductive, the ecstatic—these are the places where the divine and the erotic may be seen to converge and love and desire to commingle.

Inviting and performing a mutual seduction of disciplines, the volume brings philosophers, historians, biblical scholars, and theologians into a spirited conversation that traverses the limits of conventional orthodoxies, whether doctrinal or disciplinary. It seeks new openings for the emergence of desire, love, and pleasure, while challenging common understandings of these terms. It engages risk at the point where the hope for salvation paradoxically endangers the safety of subjects—in particular, of theological subjects—by opening them to those transgressions of eros in which boundaries, once exceeded, become places of emerging possibility.

The eighteen chapters, arranged in thematic clusters, move fluidly among and between premodern and postmodern textual traditions—from Plato to Emerson, Augustine to Kristeva, Mechthild to Mattoso, the Shulammite to Molly Bloom, the Zohar to the Da Vinci Code. In so doing, they link the sublime reaches of theory with the gritty realities of politics, the boundless transcendence of God with the poignant transience of materiality.

. . .the essays are meaty, rigorous, thoughtful. . .There's something in this volume for just about everyone. - —The Biblical and Critical Theory

Edited: Virginia Burrus
Virginia Burrus is the Bishop W. Earl Ledden Professor of Religion at Syracuse University. Her teaching and research interests in the field of ancient Christianity include gender, asceticism, constructions of orthodoxy and heresy, and the history of theology. She is currently president of the North American Patristics Society and co-editor of the University of Pennsylvania Press series Divinations: Rereading Late Ancient Religion. She is the author of six books, including Seducing Augustine: Bodies, Desires, Confessions (Fordham University Press, 2010), co-written with Mark Jordan and Karmen MacKendrick; and Sex Lives of Saints: An Erotics of Ancient Hagiography (University of Pennsylvania Press, 2004). She is also coeditor, with Catherine Keller, of Toward a Theology of Eros: Transfiguring Passion of the Limits of Discipline (Fordham University Press, 2006).