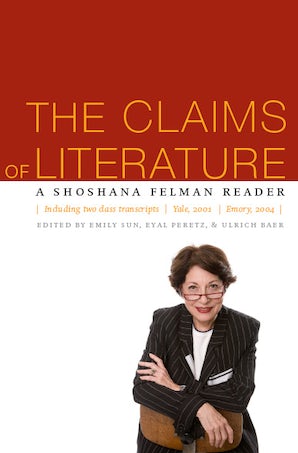 The Claims of Literature

Shoshana Felman ranks as one of the most influential literary critics of the past five decades. Her work has inspired and shaped such divergent fields as psychoanalytic criticism, deconstruction, speech-act theory and performance studies, feminist and gender studies, trauma studies, and critical legal studies. Shoshana Felman has not only influenced these fields: her work has opened channels of communication between them. In all of her work Felman charts a way for literary critics to address the ways in which texts have real effects in the world and how our quest for meaning is transformed in the encounter with the texts that hold such a promise.

It concludes with a section on Felman as a teacher, giving transcripts of two of her classes, one at Yale in September 2001, the other at Emory in December 2004.

The Claims of Literature gathers some of the true "specimen" texts of the last three decades, texts from which proceeded several of the major theoretical breakthroughs of our era. That each essay retains its full power
to re-excite thought is testament to Felman's spectacular ability to locate those moments when an argument begins to fend or feed off its own foreignness. To read—or reread—these brilliant essays is to experience
that thrilling brush with the unknown that first led Felman to reconceive the relations between writing and madness; the body and speech; femininity and sexual difference; law and justice; trauma and witnessing.

- —Joan Copjec, author of Imagine There's No Woman or Director of the Center for the study of Psychoanalysis and Culture at University at Buffalo

The time is ripe for critical theory’s re-encounter with Shoshana Felman’s singularly creative thinking and reading. Felman’s insistence on the implications of theory for literary and cultural reading over its mere “applications” remains a fundamental imperative that continues to press us today to rethink our assumptions and practices. This splendid collection brings together much of her most important work, as well as illuminating responses by Judith Butler, Stanley Cavell, and Julia Kristeva, among others. - —Kenneth Reinhard, University of California, Los Angeles

“Shoshana Felman ranks as one of the most important and most influential thinkers of
recent times. The essays selected for the reader are all widely viewed as “classics” and
represent a coherent, well-chosen and thoughtful selection. All bear witness to the clarity
of Felman’s prose and her dedication to rigorous demonstration and lucid argumentation.
Indeed, Felman’s work derives its pathbreaking insights though its dedication to the
clear expression of ideas and experiences that challenge the human capacity for clear
expression. By engaging with this essential human paradox (the need to communicate
that which defies communication), Felman’s work addresses the most important questions
of human experience and encourages her readers to open themselves up to new and
exciting ways of thinking and reading.”

Edited: Ulrich Baer
Ulrich Baer is Vice Provost for Arts, Humanities and Diversity and Professor of German and Comparative Literature at New York University. He is editor and translator of Rainer Maria Rilke: Letters of Life, editor of 110 Stories: New York Writes after September 11, and author of several books on poetry and photography. His most recent book is Beggar’s Chicken: Stories from Shanghai.

EYAL PERETZ is Assistant Professor of Comparative Literature at Indiana University.
He is the author of Literature, Disaster, and the Enigma of Power: A Reading of ‘Moby-Dick.’

Edited: Emily Sun
Emily Sun is Visiting Associate Professor in Comparative Literature and Translation Studies at Barnard College. She is author of Succeeding King Lear: Literature, Exposure, and the Possibility of Politics (Fordham, 2010) and co-editor of The Claims of Literature: A Shoshana Felman Reader (Fordham, 2007).