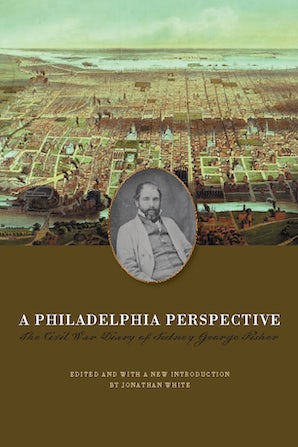 "Invaluable…many insights into the life and thought of the nineteenth century…. [Fisher's] comments are stimulating, often barbed….the narrative is smooth-flowing and fascinating."-American Historical Review

"Fisher was an astute and acerbic commentator on politics and society in Philadelphia, Washington, and the country as a whole during the Civil War. While legal, historical, and literary scholars will mine this diary for its penetrating insights, lovers of history will delight in Fisher's ability to record the quotidian and the monumental with clarity, force, and lasting effect."-Herman Belz, University of Maryland

"An indispensable source for the Northern home front during the Civil War."-Mark E. Neely, Jr., The Pennsylvania State University

An aristocratic member of a prominent Philadelphia family, Sidney George Fisher (1809-1871) was a prolific man of letters. Between 1834 and 1871, he kept a detailed diary that chronicled not only daily life in America's second city but also the key political, social, and cultural events of the nineteenth century. Published in 1967, Fisher's diary quickly became one of the most remarkable works of its kind; few published diaries are as incisive and illuminating of their era.

This book makes available once again the pages of Fisher's diary written during the Civil War. As he wrote on November 9, 1861, "My diary has become little else than a record of the events of the war, which occupies all thoughts and conversation." His "record of the events" is a uniquely valuable portrait of a city, and a nation, at war. Fisher recorded everything from conversations on street corners to arrests of civilians for treason (including some members of his family), critiques of partisan speeches and pamphlets to descriptions of battles, accounts of runaway slaves, and tales of mob violence. At the same time, he reports on dinners, parties, weddings, and funerals among the city's elite.

Brilliant journalism, the Diary is rich with Fisher's own observations- on secession, war and peace, on his admiration for Lincoln and his complicated feelings about slavery and emancipation.
The Diary, with a new introduction by Jonathan W. White, joins those of George Templeton Strong and Mary Boykin Chesnut as classic windows on American life
During the War Between the States.

Provides a tantalizing portrait of the city during the Civil War era. . . - —Pennsylvania Heritage

An invaluable source for those immediately interested in Northern Democrats during the war. - —H-Net Reviews

Edited: Jonathan White
Jonathan W. White is an assistant professor of American Studies at Christopher Newport University, in Newport News, Virginia. He is the author of Abraham Lincoln and Treason in the Civil War: The Trials of John Merryman (Louisiana State University Press, 2011), and has another book, titled “To Aid Their Rebel Friends’: Politics and Treason in the Civil War North,” under contract with LSU Press. White has published A Philadelphia Perspective:The Civil War Diary of Sidney George Fisher (Fordham University Press, 2007) and articles in Civil War History, American Nineteenth Century History, Ohio Valley History, and the Pennsylvania Magazine of History and Biography.