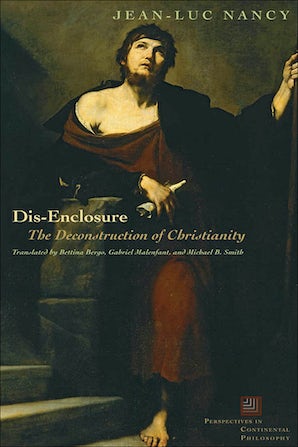 The Deconstruction of Christianity

By (author) Jean-Luc Nancy, Gabriel Malenfant and Michael B. Smith

This book is a profound and eagerly anticipated investigation into what is left of a monotheistic religious spirit—notably, a minimalist faith that is neither confessional nor credulous. Articulating this faith as works and as an objectless hope, Nancy deconstructs Christianity in search of the historical and reflective conditions that provided its initial energy. Working through Blanchot and Nietzsche, re-reading Heidegger and Derrida, Nancy turns to the Epistle of Saint James rather than those of Saint Paul, discerning in it the primitive essence of Christianity as hope.

The “religion that provided the exit from religion,” as he terms Christianity, consists in the announcement of an end. It is the announcement that counts, however, rather than any finality. In this announcement there is a proximity to others and to what was once called parousia. But parousia is no longer presence; it is no longer the return of the Messiah. Rather, it is what is near us and does not cease to open and to close, a presence deferred yet imminent.

In a demystified age where we are left with a vision of a self-enclosed world—in which humans are no longer mortals facing an immortal being, but entities whose lives are accompanied by the time of their own decline—parousia stands as a question. Can we venture the risk of a decentered perspective, such that the meaning of the world can be found both inside and outside, within and without our so-immanent world?

The deconstruction of Christianity that Nancy proposes is neither a game nor a strategy. It is an invitation to imagine a strange faith that enacts the inadequation of life to itself. Our lives overflow the self-contained boundaries of their biological and sociological interpretations. Out of this excess, wells up a fragile, overlooked meaning that is beyond both confessionalism and humanism.

By (author) Michael B. Smith