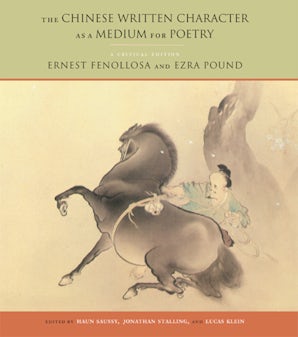 First published in 1919 by Ezra Pound, Ernest Fenollosa’s essay on the Chinese written language has become one of the most often quoted statements in the history of American poetics. As edited by Pound, it presents a powerful conception of language that continues to shape our poetic and stylistic preferences: the idea that poems consist primarily of images; the idea that the sentence form with active verb mirrors relations of natural force. But previous editions of the essay represent Pound’s understanding—it is fair to say, his appropriation—of the text. Fenollosa’s manuscripts, in the Beinecke Library of Yale University, allow us to see this essay in a different light, as a document of early, sustained cultural interchange between North America
and East Asia.

Pound’s editing of the essay obscured two important features, here restored to view: Fenollosa’s encounter with Tendai Buddhism and Buddhist ontology, and his concern with the dimension of sound in Chinese poetry.

This book is the definitive critical edition of Fenollosa’s important work. After a substantial Introduction, the text as edited by Pound is presented, together with his notes and plates. At the heart of the edition is the first full publication of the essay as Fenollosa wrote it, accompanied by the many diagrams, characters, and notes Fenollosa (and Pound) scrawled on the verso pages. Pound’s deletions, insertions, and alterations to Fenollosa’s sometimes ornate prose are meticulously captured, enabling readers to follow the quasi-dialogue between Fenollosa and his posthumous editor. Earlier drafts and related talks reveal the developmentof Fenollosa’s ideas about culture, poetry, and translation. Copious multilingual annotation is an important feature of the edition.

This masterfully edited book will be an essential resource for scholars and poets and a starting point for a renewed discussion of the multiple sources of American modernist poetry.

This is the book that I have been waiting for since I first read Ezra Pound's version of Ernest Fenollosa's The Chinese Character as a Medium for Poetry nearly half a century ago. In that guise, Fenollosa's seminal essay was immensely influential, but it had been commandeered by Pound's powerful mind and idiosyncratic views. Now, at last, Haun Saussy and his colleagues have not only given us Fenollosa's original essay in all of its glory and tentativeness, through an ingenious format and meticulous scholarship they have succeeded in presenting this masterpiece of modern poetics as the organic, evolving experiment in cultural interfusion it was meant to be.---—Victor H. Mair, University of Pennsylvania

This, the first critical edition of Ernest Fenollosa’s The Chinese Written Character as a Medium for Poetry, is a milestone in literary scholarship. Haun Saussy and his colleagues have produced an indispensable book—one that shows precisely how Ezra Pound, reworking Fenollosa, “invented” the China we have come to accept as central to his poetry—and to 20th century poetry in general. Saussy’s theoretical-critical Introduction is nothing short of brilliant, as are the notes and archival materials. A must-own book for Modernists!---—Marjorie Perloff, Stanford University

“This well-edited critical edition allows us to see for the first time just what Fenollosa’s original essays looked like before being submitted to Pound’s editorial excisions.”---—Richard Sieburth, New York University

In this superbly edited volume, Fenollosa's seminal texts and Ezra Pound's editorial markings appear together for the first time in multiple historical incarnations. The novelty and richness of the seven essays and other fragments continue to surprise and challenge the reader, even though these were written over a hundred years ago. The book offers much more than a historical document. It sheds new light on the originality of modernist poetics in its early moment: a daring effort to assert a common humanity on the basis of Chinese poetry and art at a time when racism swayed public opinion under the Chinese Exclusion Act. An important contribution to the study of modernism, American literature, comparative poetics, and cultural translation.---—Lydia H. Liu, Columbia University

How can we come to a new understanding of Chinese classical literature when our inherited view of it is so powerfully shaped and conditioned by a 'strong misreading,' which is a vital part of our own poetic language? This question afflicts Haun Saussy in his extraordinary introduction to a new critical edition of The Chines Written Character as a Medium for Poetry, which presents both the edited and original versions of Fenollosa's essay. - —The Threepenny Review

Scholarly edition that combines the first full publication of Fenollosa's essay as he wrote it, along with the 1919 version of the essay as altered by Ezra Pound. - —The Chronicle of Higher Education

This book-indispensable to anyone following modern poetics-reminds us that one of the four most influential modern essays on poetry (the others are T.S. Eliot's) was the product of a scholar-translator, writing in 1903, well before there was any modern poetry in English. Fenollosa's belief that the Chinese language is profoundly suited to poetry is well known, but because of Pound's editing, we had no way of knowing what Fenollosa made of the music of poetry. Least of all could we have imagined that he thought the music of this poetry was better preserved by Japanese phonics than by living Chinese speakers. Fenollosa was an idealistic advocate of Anglo-American empire fused with pan-Asian "humanity," by which he meant roughly what is covered by the term "humanities." He saw the approach of a peaceful east/west fusion, economic, military, and cultural, and sought to guide its arrival by elucidating the art of classical Chinese poetry, without any expectation that his essay would alter the ways that Anglo-American poets shape sentences.
This handsome edition is a major contribution to the history of modern poetics. Until now we have known little of the intellectual, political, and religious context of this great essay on diction and syntax. Haun Saussy, Jonathan Stalling, and Lucas Klein reveal the range and growth of Fenollosa's still appealing conviction that modern poetry has to go far beyond national borders.

Fenollosa's critical assessment of what could evolve from a blending of the East and West is perhaps more relevant today than when it was written. - —Oyster Boy Review

By (author) Ernest Fenollosa
ERNEST FRANCISCO FENOLLOSA (1853–1908) taught at the Imperial University of Tokyo. In 1890 he became Asian curator at the Boston Museum of Fine Arts.

By (author) Lucas Klein
LUCAS KLEIN is a graduate student in East Asian Languages and Literatures at Yale University. 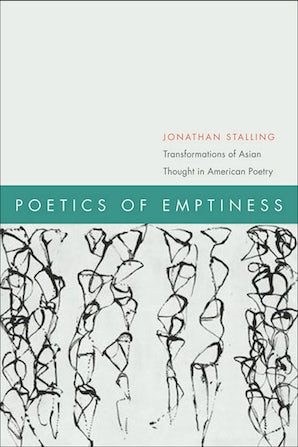