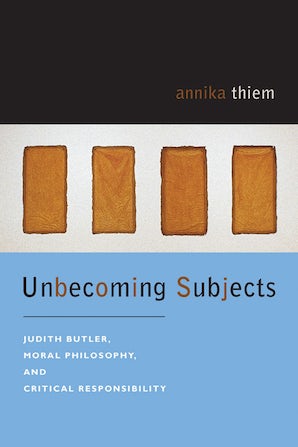 Putting into conversation Butler's earlier and most recent work, Unbecoming Subjects begins by examining how Butler's critique of the subject as nontransparent to itself, formed thoroughly through relations of power and in subjection to norms and social practices, poses a challenge to ethics and ethical agency. The book argues, in conversation with Butler, Levinas, and Laplanche, that responsibility becomes possible only when we do not know what to do or how to respond, yet find ourselves under a demand to respond, and even more, to respond well to others.

Drawing on the work of Butler, Adorno, and Foucault, Unbecoming Subjects examines critique as a central practice for moral philosophy. It interrogates the limits of moral and political knowledge and probes methods of social criticism to uncover and oppose injustices.

Examines the American scholar's poststructuralist thought in relation to moral philosophy. - —The Chronicle of Higher Education

Open[s] a space for other writers to consider more compelling arguements for social justice . . . - —M/C Reviews

By (author) Annika Thiem
Annika Thiem is associate professor of philosophy at Villanova University. She is completing a book manuscript on the contributions of the German-Jewish thinkers Hermann Cohen and Walter Benjamin to critical engagements with theological and religious discourse in the early twentieth century. She is the author of Unbecoming Subjects: Judith Butler, Moral Philosophy, and Critical Responsibility (2009) and of numerous articles in political theology, feminist and queer theory.