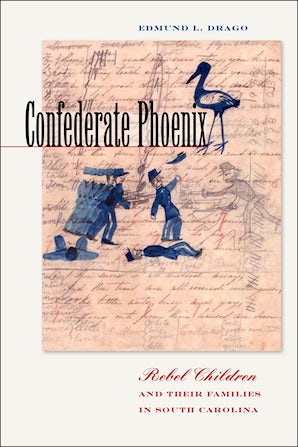 Rebel Children and Their Families in South Carolina

In this innovative book, Edmund L. Drago tells the first full story of white children and their families in the most militant Southern state, and the state where the Civil War erupted.

Drawing on a rich array of sources, many of them formerly untapped, Drago shows how the War transformed the domestic world of the white South. Households were devastated by disease, death, and deprivation. Young people took up arms like adults, often with tragic results. Thousands of fathers and brothers died in battle; many returned home with grave physical and psychological wounds. Widows and orphans often had to fend for themselves.

From the first volley at Fort Sumter in Charleston harbor to the end of Reconstruction, Drago explores the extraordinary impact of war and defeat on the South Carolina home front. He covers a broad spectrum, from the effect of “boy soldiers” on the ideals of childhood and child rearing to changes in education, marriage customs, and community as well as family life. He surveys the children’s literature of the era and explores the changing dimensions of Confederate patriarchal society. By studying the implications of the War and its legacy in cultural memory, Drago unveils the conflicting perspectives of South Carolina children—white and black—today.

Drago has amassed some wonderful sources and informs his scholarship with a deep knowledge of the geographic and temporal world about which he writes. - —H-Childhood

The quantity of topics and anecdotes in this volume call for historians to hear children's voices and to pay attention to their actions during the war. - —American Historical Review

Drago's richly detailed study of South Carolina youths and their families adds to this growing body of scholarship while reaising new questions about the war's impact on the nature of families in the Confederate South and the cultural significance of war and memory. - —The Journal of American History

Drago's exploration of the many ways that childhood and war merged will be intriguing to scholars interested in the Civil War, gender, and family. - —The Journal of Southern History

The combination of unique primary source material, relative brevity, and clear prose make this work quite suitable for assignment at the undergraduate level for those teaching Civil War classes. - —H-Net Review

[Confederate Phoenix] begins to fill a void in this neglected subject of the war in South Carolina . . . - —The Post and Courier

. . . Fills an important gap in an area of Civil War scholarship that has yet to receive the attention it deserves, and is a must read for anyone interested in the Palmetto State's role in the Civil War. - —Blue & Gray Magazine

By (author) Edmund L. Drago
EDMUND L. DRAGO is Professor of History at the College of Charleston. His most recent book is Charleston’s Avery Center: From Education to Preserving the African American Experience.