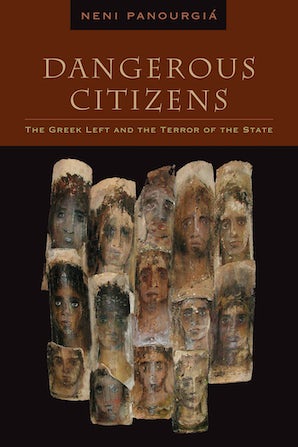 The Greek Left and the Terror of the State

This book simultaneously tells a story—or rather, stories—and a history. The stories are those of Greek Leftists as paradigmatic figures of abjection, given that between 1929 and 1974 tens of thousands of Greek dissidents were detained and tortured in prisons, places of exile, and concentration camps. They were sometimes held for decades, in subhuman conditions of toil and deprivation.

The history is that of how the Greek Left was constituted by the Greek state as a zone of danger. Legislation put in place in the early twentieth century postulated this zone. Once the zone was created, there was always the possibility—which came to be a horrific reality after the Greek Civil War of 1946 to 1949—that the state would populate it with its own citizens. Indeed, the Greek state started to do so in 1929, by identifying ever-increasing numbers of citizens as “Leftists” and persecuting them with means extending from indefinite detention to execution.

In a striking departure from conventional treatments, Neni Panourgiá places the Civil War in a larger historical context, within ruptures that have marked Greek society for centuries. She begins the story in 1929, when the Greek state set up numerous exile camps on isolated islands in the Greek archipelago. The legal justification for these camps drew upon laws reaching back to 1871—originally directed at controlling “brigands”—that allowed the death penalty for those accused and the banishment of their family members and anyone helping to conceal them. She ends with the 2004 trial of the Revolutionary Organization 17 November.

Drawing on years of fieldwork, Panourgiá uses ethnographic interviews, archival material, unpublished personal narratives, and memoirs of political prisoners and dissidents to piece together the various microhistories of a generation, stories that reveal how the modern Greek citizen was created as a fraught political subject.

Her book does more than give voice to feelings and experiences suppressed for decades. It establishes a history for the notion of indefinite detention that appeared as a legal innovation with the Bush administration. Part of its roots, Panourgiá shows, lie in the laboratory that Greece provided for neo-colonialism after the Truman Doctrine and under the Marshall Plan.

Dangerous Citizens is a simultaneous indictment of the "liberal" nation-state's blithe pretensions and willful self-ignorance; of the political and discursive relegation of modern Greek history to the historical margins of the colonial "civilizing mission"; and of inhuman simplifications of the past everywhere. In an evocation of Oedipus that owes nothing to crass invocations of continuity with the ancient world, Neni Panourgiá writes with the ethical passion of a partial witness who nonetheless claims no special privilege other than that of the common humanity denied by the state to those it repeatedly configures as its enemies. In posing this appealingly controversial challenge to the liberal self-imagination, moreover, Panourgiá -- who has honed her distinctive writing idiom into a compelling mix of careful scholarship and stylistic adventurism -- calls anthropology itself to account.---—Michael Herzfeld, Harvard University

Columbia anthropology professor Neni Panourgia's new project takes the concept of an 'interactive conversation' a step further. The recent online release of Dangerous Citiznes: The Greek Left and the Terror of the State by far exceeds the publication of the book by the same name in being revolutionary. Instead of being your average Kindle e-book or online PDF, the new Website is a freely accessed interactive, multimedia text that exemplifies an exciting but problematic pathway for published scholarship. - —The Eye

Dangerous Citizens is a powerful and unforgettable book. It is at once a horrific history of nearly a century of state violence in Greece that few people may be aware of; a profound meditation on the conditions of possibility for both the idea and the reality of concentration camps; and a text that intertwines ethnography, history, and personal memoir to very powerful effect.---—Sherry Ortner, University of California, Los Angeles

A riveting ethnographic account of the experiences of dissidents of the
Greek state in the course of the twentieth century. The insights of
Panourgia's new book promise to change the way in which anthropologists read and engage with social theory. This book should become compulsory reading for any course in anthropology and European studies.

Dangerous Citizens is several brilliant books at once: meditation, memoir, ethnography, an intricate political history of Modern Greece. But it has a single subject: what happens to persons who are defined by others as dangerous and yet feel themselves to be powerless, banished to a social margin. Neni Parourgia's goal is to reconstruct and understand the daily (and nightly) lives of these persons, and to orchestrate their eloquent but all too rarely heard cries.---—Michael Wood, Princeton University

Intimate, fascinating, and inventively analytic . . . A worthy and brilliant successor to Panourgia's much acclaimed Fragments of Death, Fables of Identity: An Athenian Anthropography.---—George E. Marcus, University of California, Irvine

A most challenging reflection about the presence of the past in society,
Panourgia's new book relates the singular story of the Greek Left,
bringing out its multiple voices and often conflicting narratives. In this
ethnography, based both on the author's past experiences and on extensive
fieldwork in Athens, the narrator/anthropologist explores the tension
between individual voices and collective representations and boldly
confirms -again- that the writing of anthropology can always be an
innovative experience.

. . . An anthropological approach to the G reek state's response to the Greek left. - —H-War List-serv

By (author) Neni Panourgiá
Neni Panourgiá is Associate Professor of Anthropology at Columbia University. She has published Fragments of Death, Fables of Identity: An Athenian Anthropography, winner of the Grand Jury Prize of the International Society of Ethnohistory and co-winner of the Chicago Folklore Prize. She has co-edited, with George E. Marcus, the volume Ethnographica Moralia: Experiments in Interpretive Anthropology (Fordham). 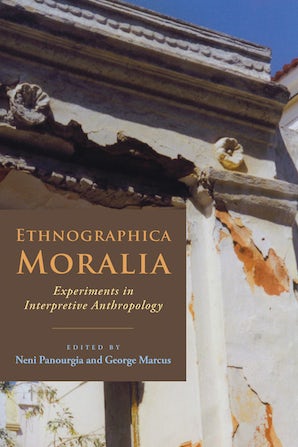