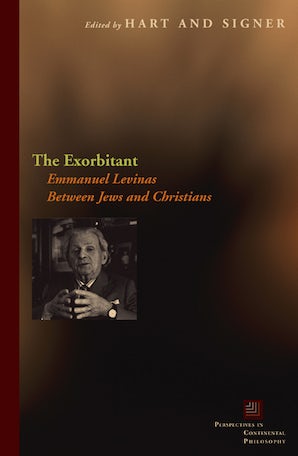 Emmanuel Levinas Between Jews and Christians

Edited by Kevin Hart and Michael A. Signer

We are exorbitant, and rightly so, when we cut any link we may have to cosmological powers. Levinas invites us to be exorbitant by distancing ourselves from visions of metaphysics, epistemology, and theology. We begin to listen well to Levinas when we hear him inviting us to break completely with the pagan world in which the gods are simply the highest beings in the cosmos and learn to practice an adult religion in which God is outside cosmology and ontology.
God comes to mind neither in our attempts to think him as the creator of the cosmos nor in moments of ecstasy but in acts of genuine holiness, such as sharing a piece of bread with someone in a time of desperate need. Levinas, in short, enjoins us to be exorbitant in our dealings with one another.

This book asks how the "between" of Levinas's thinking facilitates a dialogue between Jews and Christians. In one sense, Levinas stands exactly between Jews and Christians: ethics, as he conceives it, is a space in which religious traditions can meet. At the same time, his position seems profoundly ambivalent. No one can read a page of his writings without hearing a Jewish voice as well a a philosophical one. Yet his talk of substitution seems to resonate with Christological themes. On occasion, Levinas himself sharply distinguishes Judaism from Christianity--but to what extent can his thinking become the basis for a dialogue between Christians and Jews?

This book, with a stellar cast of contributors, explores these questions, thereby providing a snapshot of the current state of Jewish-Christian dialogue.

A valuable contribution from which not only philosophers, but also theologians and scholars in Jewish, Catholic, and religious studies can learn much. - —Adriaan T. Peperzak, Loyola University, Chicago

. . . The individual essays in this volume are most engaging and well balanced, advancing provocative readings of Levinas as a philosopher; as a philosopher or religion; as a Jewish philosopher; and as a contemporary thinker highly relevant to discussions about modern and postmodern Christian thought. - —H-Net Reviews

Edited: Kevin Hart
Kevin Hart is Chairman and Edwin B. Kyle Professor of Christian Studies in the Department of Religious Studies at the University of Virginia. He also holds courtesy professorships in the Departments of English and French. In addition, he is Eric D’Arcy Professor of Philosophy at the Australian Catholic University. Among his recent scholarly books are Jean- Luc Marion: The Essential Writings (2012), Clandestine Encounters: Philosophy in the Narratives of Maurice Blanchot (2010), and The Exorbitant: Emmanuel Levinas between Jews and Christians (2010). His collections of poetry are Flame Tree: Selected Poems (2002), Young Rain (2008), and Morning Knowledge (2011).