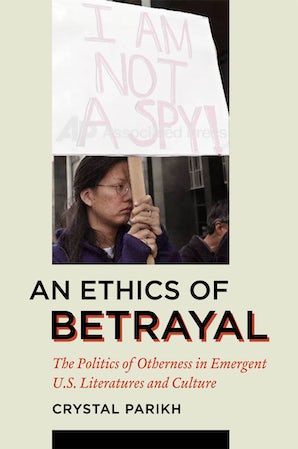 An Ethics of Betrayal

The Politics of Otherness in Emergent U.S. Literatures and Culture

In An Ethics of Betrayal, Crystal Parikh investigates the theme and tropes of betrayal and treason in Asian American and Chicano/Latino literary and cultural narratives. In considering betrayal from an ethical perspective, one grounded in the theories of Emmanuel Levinas and Jacques Derrida, Parikh argues that the minority subject is obligated in a primary, preontological, and irrecusable relation of responsibility to the Other.

Episodes of betrayal and treason allegorize the position of this subject, beholden to the many others who embody the alterity of existence and whose demands upon the subject result in transgressions of intimacy and loyalty.

In this first major comparative study of narratives by and about Asian Americans and Latinos, Parikh considers writings by Frank Chin, Gish Jen, Chang-rae Lee, Eric Liu, Américo Parades, and Richard Rodriguez, as well as narratives about the persecution of Wen Ho Lee and the rescue and return of Elian González. By addressing the conflicts at the heart of filiality, the public dimensions of language in the constitution of minority "community," and the mercenary mobilizations of "model minority" status, An Ethics of Betrayal seriously engages the challenges of conducting ethnic and critical race studies based on the uncompromising and unromantic ideas of justice, reciprocity, and ethical society.

An exciting departure from identity discourse, THE ETHICS OF BETRAYAL
reframes those projects through continental philosophy and ethics, and
argues that despite the celebration of difference, racialized
minorities remain the subjects and objects of betrayal. Further,
Parikh provokes thinking across theoretical and racialized borders,
and gestures toward a literary ethics to enrich the reading of texts.

A deeply philosophical, yet historically timely and keenly political intervention into the figure of the traitor broadly conceived.  Parikh mines the significance of betrayal for those constructed as alien to the nation not only in its literal manifestations but within complexly theorized notions of ethnic infidelity.  Her readings of assimilation in the context of neoconservatism and of the spy’s “intelligence work” as an allegory of the intellectual work of Ethnic Studies are particularly brilliant.  Demonstrating an acute pedagogy of suspicion, this book will be particularly generative for anyone theorizing race in our post-9/11 landscape.---—Leslie Bow, University of Wisconsin, Madison

Crystal Parikh has written an extraordinary study about betrayal and the possibilities that an ethics of betrayal—one that reads for the Others who have been overlooked, denied, or disavowed in order to establish self-presence and -certitude—offers to cultural critics who are interested in the questions of how and why projects of democracy and social justice for 'the Other' are (im)possible.---—Tina Y. Chen, Vanderbilt University

A highly illuminating account of how issues of betrayal have shaped Asian American and Latino cultures and politics, and a provocative set of reflections on the ethical conclusions that might be drawn from this history.---—Daniel Kim, Brown University

Explores themes of betrayal and treason in Asian-American and Chicano and Latin literature, including works by Frank Chin and Américo Parades. - —The Chronicle of Higher Education