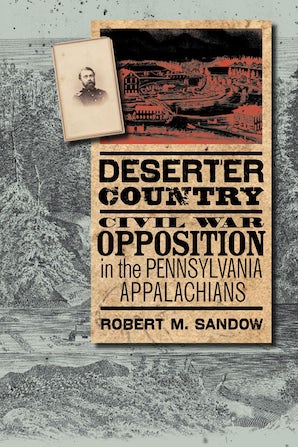 During the Civil War, there were throughout the Union explosions of resistance to the war -from the deadly Draft Riots in New York City to other, less well-known outbreaks. In Deserter Country, Robert Sandow explores one of these least known "inner civil wars", the widespread, sometimes violent opposition in the Appalachian lumber country of Pennsylvania.

Sparsely settled, these mountains were home to divided communities that provided safe-haven for opponents of the war. The dissent of mountain folk reflected their own marginality in the face of rapidly increasing exploitation of timber resources by big firms, as well as partisan debates over loyalty.

One of the few studies of the northern Appalachians, this book draws revealing parallels to the War in the southern mountains, exploring the roots of rural protest in frontier development, the market economy, military policy, partisan debate, and everyday resistance. Sandow also sheds new light on the party politics of rural resistance, rejecting easy depictions of war-opponents as traitors and malcontents for a more nuanced and complicated study of the class, economic upheaval, and localism.

Sandow's study of the Pennsylvania Appalachian region is an excellent example of the new direction in Civil War history. As we move away from broad interpretations of the war and towards more localized studies, we may better understand the interplay that existed, not only between soldiers and the home front, but also between local communities and the larger nation. - —Pennsylvania Magazine of History and Biography

Sandow deftly references a limited historical record, augmenting often-suspect personal letters and diaries with newspapers, official census and court records, as well as a variety of other state and local government documents, to present a balanced, compelling interpretation of why the geographic, economic, social and political conditions that predominated in Pennsylvania's Appalachian region provided 'fertile ground for Civil War opposition.' - —Civil War Times

. . . Offers a valuable corrective to previous portraits of wartime dissent and proves once again that community studies, far from being myopic and tangential, can offer substantive interpretations with broad implications. - —American Historical Review

Robert M. Sandow is an associate professor of history at Lock Haven University of Pennsylvania. He is the author of Deserter Country: Civil War Opposition in the Pennsylvania Appalachians (Fordham) and has presented numerous articles and conference papers. His recent work addresses issues of political dissent and rural protest on the northern home front.

Robert M. Sandow is an associate professor of history at Lock Haven University of Pennsylvania. He is the author of Deserter Country: Civil War Opposition in the Pennsylvania Appalachians (Fordham University Press, 2009) and has presented numerous articles and conference papers. His recent work addresses issues of political dissent and rural protest on the northern home front.