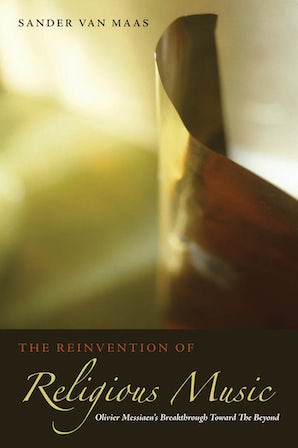 The Reinvention of Religious Music

Olivier Messiaen's Breakthrough Toward the Beyond

On the basis of a careful analysis of Olivier Messiaen's work, this book argues for a renewal of our thinking about religious music. Addressing his notion of a "hyper-religious" music of sounds and colors, it aims to show that Messiaen has broken new ground. His reinvention of religious music makes us again aware of the fact that religious music, if taken in its proper radical sense, belongs to the foremost of musical adventures.

The work of Olivier Messiaen is well known for its inclusion of religious themes and gestures. These alone, however, do not seem enough to account for the religious status of the work. Arguing for a "breakthrough toward the beyond" on the basis of the synaesthetic experience of music, Messiaen invites a confrontation with contemporary theologians and post-secular thinkers. How to account for a religious breakthrough that is produced by a work of art?

Starting from an analysis of his 1960s oratorio La Transfiguration de Notre-Seigneur Jésus-Christ, this book arranges a moderated dialogue between Messiaen and the music theology of Hans Urs von Balthasar, the phenomenology of revelation of Jean-Luc Marion, the rethinking of religion and technics in Jacques Derrida and Bernard Stiegler, and the Augustinian ruminations of Søren Kierkegaard and Jean-François Lyotard. Ultimately, this confrontation underscores the challenging yet deeply affirmative nature of Messiaen's music.

Labeled "philosophy" by the publisher, this book contains neither musical examples (either in score or CD form) nor an index, but it does offer 40 pages of notes and an extensive bibliography that includes Augustine, Eduard Hanslick, Heidegger, Kant, and Kierkegaard. The writings of Hans Urs von Balthasar and Jean-Luc Marion serve as points of departure and scrutiny. Positing that listening to Messiaen's music requires more than aesthetics, theology, musicology, or theory, musicologist Sander van Maas investigates whether the "musical experience of the work of Messiaen merely results from ingenious rhetorical techniques" or whether there is something more. Is the music, as Messiaen himself believed, a "breakthrough toward the beyond" (i.e., an inner "dazzlement" or religious experience)? Or, in the contrary view, is this "breakthrough" a nonreligious "adoration of music"? According to the author, Messiaen "situates the listener at once inside and outside faith." Not meant for casual reading, the book includes sentences such as "Thinking about the phenomenon in terms of objectivity mystifies the original phenomenality of the phenomenon." Those who do embark on the book will likely find Messiaen's The Technique of My Musical Language (Eng. tr., 1956) and a CD of "La Transfiguration de Notre-Seigneur Jésus-Christ" useful aids. Summing Up: Recommended. Researchers, faculty, professionals. - —Choice

A penetrating and thought-provoking exploration of what might be entailed by Messiaen’s musical ‘breakthrough to the beyond’.  The Reinvention of Religious Music provides us with a wealth of fresh and original perspectives on this complex, endlessly fascinating musician.---—Jeremy Begbie, Duke University

In his eloquent and detailed study, van Maas discusses the theological meaning of Messiaen’s music and the ways in which this unique sound world seeks to configure and even evangelize Messiaen’s Christian thought. Maas presents an absorbing and provocative insight into Messiaen’s faith in music that will enhance appreciation of this often misunderstood composer and his work.---—Andrew Shenton, Boston University

If the idea that religious music is a thing of the past helps you sleep better, Sander van Maas' provocative book should wake you up. Did you ever think that an ear could be circumcised? From the Bible to Messiaen and Derrida, he radically rethinks the relationships between ear and flesh.---—Peter Szendy, Université de Paris X Nanterre

Examines the religious dimension of this composer's music. - —Publishers Weekly