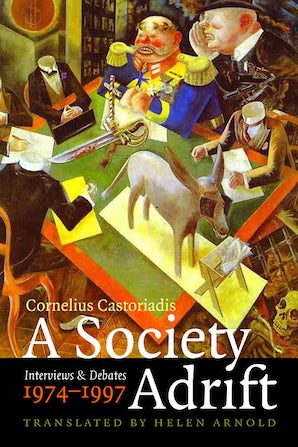 This posthumous collection of interviews and occasional papers given by Castoriadis between 1974 and 1997 is a lively, direct introduction to the thinking of a writer who never abandoned his radically critical stance. It provides a clear, handy résumé of his political ideas, in advance of their times and profoundly relevant to today’s world.

For this political thinker and longtime militant (co-founder with Claude Lefort of the revolutionary group “Socialisme ou Barbarie”), economist, psychoanalyst, and philosopher, two endless interrogations—how to understand the world and life in society—were intertwined with his own life and combats.

An important chapter discusses the history of “Socialisme ou Barbarie” (1949—1967); in it, Castoriadis presents the views he defended, in that group, on a number of subjects: a critique of Marxism and of the Soviet Union, the bureaucratization of society and of the workers’ movement, and the primacy of individual and collective autonomy. Another chapter presents the concept, central to his thinking, of “imaginary significations” as what make a society “cohere.”

Castoriadis constantly returns to the question of democracy as the never-finished, deliberate creation by the people of societal institutions, analyzing its past and its future in the Western world. He scathingly criticizes “representative” democracy and develops a conception of direct democracy extending to all spheres of social life.

He wonders about the chances of achieving freedom and autonomy—those requisites of true democracy—in a world of endless, meaningless accumulation of material goods, where the mechanisms for governing society have disintegrated, the relationship with nature is reduced to one of destructive domination, and, above all, the population has withdrawn from the public sphere: a world dominated by hobbies and lobbies—”a society adrift.”

All the material in A Society Adrift, a posthumous collection of lectures and writings by Castoriadis, appeared well after that upheaval. The earliest of the texts gathered here, a long interview from 1974, is an extensive political and intellectual autobiography covering the SOUB years and just beyond. It is followed by the transcript of a 1982 radio discussion that provides an excellent introduction to Castoriadis's subsequent philosophical and psychoanalytic work. - —Bookforum

A gateway to Castoriadis' adventurous and open-ended way of thinking, his tireless attempts to envision the imperceptible future. - —Stathis Gourgouris, Columbia University

A gateway to Castoriadis' adventurous and open-ended way of thinking, his tireless attempts to envision the imperceptible future.---—Stathis Gourgouris, Columbia University

Translator HELEN ARNOLD participated for several years in the “Socialisme ou Barbarie”
political group along with Castoriadis, co-founder of the group. She has also translated his Figures of the Thinkable.

By (author) Cornelius Castoriadis
The late CORNELIUS CASTORIADIS (1922—1997), a Greek-French political thinker and longtime militant, as well as economist, practicing psychoanalyst, and philosopher, former Director of Studies at the École de Hautes Études en Sciences Sociales, has been published extensively in English, including The Imaginary Institution of Society; World in Fragments; Writings on Politics, Society, Psychoanalysis, and the Imagination; and Figures of the Thinkable.