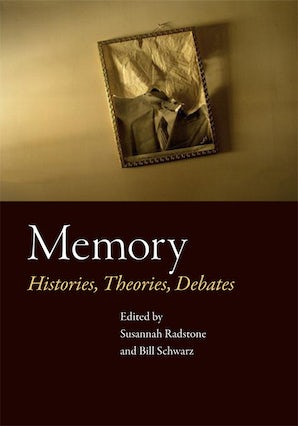 Memory has never been closer to us, yet never more difficult to understand. In the more than thirty specially commissioned essays that make up this book, leading scholars survey the histories, the theories, and the faultlines that compose the field of memory research.

The volume reconstructs the work of the great philosophical and literary figures of the last two centuries who recast the concept of memory and brought it into the forefront of the modernist and postmodernist imagination—among them, Bergson, Halbwachs, Freud, Proust, Benjamin, Adorno, Derrida, and Deleuze. Drawing on recent advances in the sciences and in the humanities, the contributors address the
question of how memory works, highlighting transactions between the interiority of subjective memory and the larger fields of public or collective memory.

The public, political life of memory is an increasingly urgent issue in the societies we now inhabit, while the category of memory itself seems to become ever more capacious.

Asking how we might think about the politics of memory, the closing chapters explore a number of defining instances in which the troubled phenomenon of memory has entered and reshaped our very conception of what makes and drives the domain of politics. These include issues of slavery, the Soviet experience, the Holocaust, feminism and recovered memory, and memory in post-apartheid South Africa.

An outstanding collection. The topics, themes, and theorists discussed have been selected with a good eye for the current state of play in memory studies, providing an excellent introduction to the discipline. - —Ross Poole, The New School

“Amidst the burgeoning profusion of contemporary writings about memory, this imposing collection now deserves pride of place. From multiple perspectives and diverse disciplines, it offers the very best of access to the complicated ground from which the problems of “history” and “memory”
may now be engaged. There is no better guide to be found.”

A remarkably comprehensive and interdisciplinary compilation of recent
thought and scholarship on memory. Provocative, incisive, accessible, and
sometimes superb, these essays lead us, like memory itself, from the past
to the future of the subject.

- —Michael Lambek, editor of Tense Past: Cultural Essays in Trauma and Memory and author of The Weight of the Past: Living with History in Madagascar

Edited: Susannah Radstone
Susannah Radstone is Reader in Cultural Theory in the School of Humanities and Social Sciences at the University of East London. Her publications include The Sexual Politics of Time: Confession, Nostalgia, Memory and several edited collections, including Memory and Methodology and, with Katharine Hodgkin, Memory Cultures and the Politics of Memory.

Edited: Bill Schwarz
Bill Schwarz teaches in the School of English and Drama, Queen Mary, University of London. The first volume of his Memories of Empire is due out from Oxford University Press shortly. Most recently he has edited West Indian Intellectuals in Britain; The Locations of George Lamming; and Caribbean Literature after Independence: The Case of Earl Lovelace. He is an editor of History Workshop Journal and of New Formations.