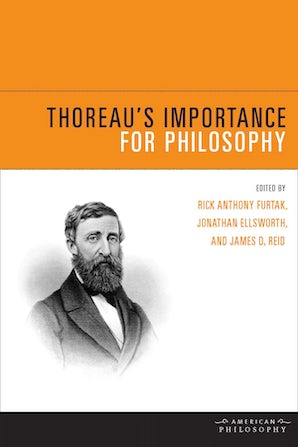 The philosophical significance of Henry David Thoreau's life and writings is far from settled. Although his best-known book, Walden, is admired as a classic work of American literature, it has not yet been widely recognized as an important philosophical text. In fact, many members of the academic philosophical community in America would be reluctant to classify Thoreau as a philosopher at all. The purpose of this volume is to remedy this neglect, to explain Thoreau's philosophical significance, and to argue that we can still learn from his polemical conception of philosophy.

Thoreau sought to establish philosophy as a way of life, and to root our philosophical, conceptual affairs in more practical or existential concerns. His work provides us with a sustained meditation on the appropriate conduct of life and the importance of leading our lives with integrity, avoiding what he calls "quiet desperation." The contributors to this volume approach Thoreau's writings from different angles, collectively bringing to light what, in his own distinctive and idiosyncratic way, this major American thinker has meant to multiple areas of philosophical inquiry, and why he is still relevant. They show how the imagination, according to Thoreau, might be related to the disclosure of truth; they illuminate the nuances of embodied consciousness and explore the links between moral character and scientific knowledge. They clarify Thoreau's project by locating it in relation to earlier philosophical authors and traditions, noting the ways in which he either anticipated or influenced a host of later thinkers. They explore his aesthetic views, his naturalism, his theory of self, his ethical principles, and his political stances. Most importantly, they show how Thoreau returns philosophy to its roots as the love of wisdom.

For all the rich diversity of these essays about Thoreau, they are bound together by their consistent, and penetrating, attention to the specifically philosophical dimension of his thought. Thoreau is to be taken seriously as a philosopher, as Stanley Cavell, interviewed in the collection, made eloquently clear many years ago. A book with this emphasis is long overdue, and readers will find Thoreau's Importance for Philosophy challenging and illuminating.---—H. Daniel Peck, author of Thoreau's Morning Work

A sustained encounter between Thoreau’s sense of philosophy as urgent
cultural work--at once ethical, metaphysical, political, aesthetic, epistemological, and religious--and the current dispensations of academic philosophy is long overdue. The learned, genial, and intense guides who here stage this encounter produce a reckoning with Thoreau and with philosophy that is not to be missed.

This book should be of particular interest to those working at the intersection of American philosophy and American literature and, more importantly, to anyone seriously interested in reflecting on philosophy in new ways. - —Choice