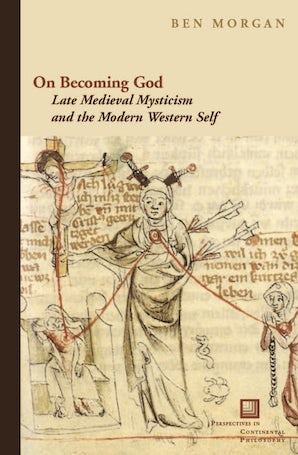 Late Medieval Mysticism and the Modern Western Self

Do we have to conceive of ourselves as isolated individuals, inevitably distanced from other people and from whatever we might mean when we use the word God? On Becoming God offers an innovative approach to the history of the modern Western self by looking at human identity as something people do together rather than on their own. Ben Morgan argues that the shared practices of human identity can be understood as ways of managing and keeping at bay the impulses and experiences associated with the word God. The “self” is a way of doing things, or of not doing things, with “God.”

The book draws on phenomenology (Heidegger), gender studies (Beauvoir, Butler) and contemporary neuroscience to present a new approach to the history of modern identity. It surveys existing approaches to modern selfhood (Foucault, Charles Taylor) and proposes an alternative account by investigating late medieval mysticism, in particular texts written in Germany by Meister Eckhart and others in the same milieu.

Reactions to the condemnation of Meister Eckhart’s teaching for heresy in 1329 offer a microcosm of the circumstances in which something like the modern self arises as people change their behavior toward others, toward themselves, and toward what they call “God.” The book makes Meister Eckhart and his contemporaries appear as our contemporaries by changing the assumptions with which we approach our own identity.

To make this change requires a revision of current vocabularies for approaching ourselves, and in particular the vocabulary and habits inherited from psychoanalysis. The book finishes by exploring the parallel between late medieval confessors and their spiritual charges, and late-nineteenth-century psychoanalysts and their patients. The result is a renewed vision of the Freud’s project of finding a vocabulary for acknowledging and nurturing our everyday commitments to others and to our spiritual longings.

“It stands on its own as a new and essential contribution both to the interpretation of the significance of medieval mysticism and to question of identity-formation.”---—Niklaus Largier, University of California, Berkeley

The book is about surprising 'ourselves out of our preconceptions' – so as to be able to revise our assumptions about who we are. But the book also demonstrates what it is about: in reading the book we are as readers offered opportunities to let ourselves be surprised.---—Arne Grøn, University of Copenhagen

This engaging, challenging book is a welcome addition to the growing literature on the theme of deification in Western thought, a long-neglected topic that nevertheless remains central to Christian theology. - —Ephemerides Theolicae Lovanienses