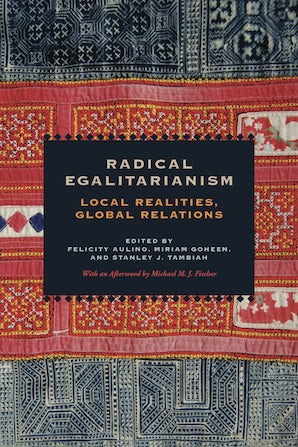 The book’s chapters, drawing on research in East and Southeast Asia, Africa, Europe, and the Americas, are also in conversation with the extensive work of editor and contributor Stanley J. Tambiah: They all investigate some aspect of what Tambiah has called “multiple orientations to the world.” The implicit focus throughout is on human cultural differences and the historically constituted nature of the political potentialities (both positive and negative) that stem from these. As a whole, then, the volume promotes an approach to scholarship that actively avoids privileging any one conceptual framework or cultural form at the expense of recognizing another—a style of inquiry that the editors call “radical egalitarianism.”

Together, these scholars encourage a comparative examination of contemporary societies, provide insights into the historical development of social scientific and sociopolitical categories, and raise vital questions about the possibilities for achieving equality and justice in the presence of competing realities in the global world today. Michael M.J. Fischer’s Afterword provides a brilliant exegesis of Tambiah’s multifaceted oeuvre, outlining the primary themes that inform his scholarship and, by extension, all the chapters in this book.

“The scholarship embodied in the collection is consistently high quality and the contributions combine theoretical rigor with rich empirical detail. The volume both reflects and extends Stanley J. Tambiah’s contributions to anthropology.”---—Elizabeth Traube, Wesleyan University

Edited: Felicity Aulino
Felicity Aulino is a medical anthropologist and ethnographic filmmaker with primary area specialization in Thailand. She is currently a Mellon Postdoctoral Fellow in the Department of Anthropology at the University of Massachusett s Amherst and the Five College Consortium Program in Culture, Health, and Science.

Edited: Miriam Goheen
Miriam Goheen is Professor of Anthropology-Sociology and Black Studies at Amherst College and editor of The African Studies Review. Her publications include Men Own the Fields, Women Own the Crops: Gender and Power in the Cameroon Highlands.

Edited: Stanley J. Tambiah
Stanley J. Tambiah is Esther and Sidney Rabb Professor (Emeritus) of Anthropology at Harvard University. He began field work in Sri Lanka (1956–1959), the island of his birth, and later worked in Thailand. He is the author of ten books, including World Conqueror and World Renouncer: A Study of Religion and Polity in Thailand against a Historical Background (1976), The Buddhist Saints of the Forest and the Cult of Amulets: A Study in Charisma, Hagiography, Sectarianism, and Millennial Buddhism (1984), Magic, Science, Religion, and the Scope of Rationality (1990), Buddhism Betrayed? Religion, Politics, and Violence in Sri Lanka (1992), and Leveling Crowds: Ethnonationalist Conflicts and Collective Violence in South Asia (1996).