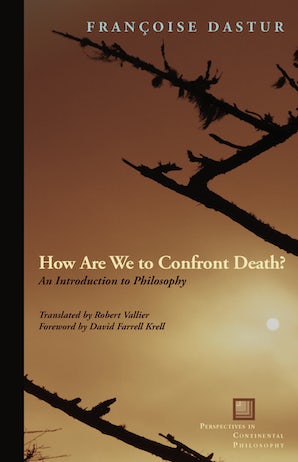 How Are We to Confront Death?

An Introduction to Philosophy

Confronting death means looking it squarely in the face. Contemporary society refuses to do so, preferring to hide it and hide from it. Funeral rites no longer function as a way to mediate death or to maintain a link between the living and dead. Today the disappearance of certain funerary practices attests to the denial of death as such. They reflect a preference for focusing on remembering the life of the deceased in order to neutralize death, thus displacing the value of mourning, now viewed as something to be done as quickly as possible. Moreover, science, like religion before it and like the contemporary “cult of the body,” has fed our fantasies about immortality, promising us longer lives of better quality, and even the possibility of conquering death altogether.

Despite all these attempts to overcome or neutralize death, humanity has been unable to eliminate its anxiety about death and nothingness. True to her roots in phenomenology, Dastur not only examines these contemporary tendencies with a critical eye but also argues that we must once again learn to assume death, to become mortal, to learn how to die. Death is not the last moment of human life, but rather its essential attribute.

Dastur’s skill as a “translator” of phenomenology into accessible and clear prose is nowhere more apparent than in her “little book on death”—indeed, the intended audience is less those who specialize in phenomenology or academic philosophy than a nonspecialist public hungry for philosophical reflection on what is closest to us. And nothing is closer to us than the ever-present possibility of our own imminent death.

As its subtitle suggests, this book is an “introduction to philosophy,” one that obliges the reader to ask what it means to be human and to embrace death and mortality as the defining essence of our humanity.

Françoise Dastur is Professeur Emerita at the Université de Nice. Her most recent book to appear in English is How Are We to Confront Death? An Introduction to Philosophy (Fordham).

There is no question that Françoise Dastur is one of the most important interpreters of the phenomenological tradition. She is, however, a real philosopher in her own right. This fact is nowhere more evident than in her little book on death. Dastur’s How are we to Confront Death reminds us of what modern, technological life has made us forget: that the feeling of anxiety in the confrontation with death is deeply connected to the laughter that liberates us from our everyday worries. All of us need this reminder that Françoise Dastur has given us.---—Leonard Lawlor, Pennsylvania State University

“An extraordinary little book on a subject of interest quite literally to us all.”---—Michael Naas, DePaul University

By (author) Françoise Dastur
Françoise Dastur is Professeur Emerita at the Université de Nice. Her most recent book to appear in English is How Are We to Confront Death? An Introduction to Philosophy (Fordham).