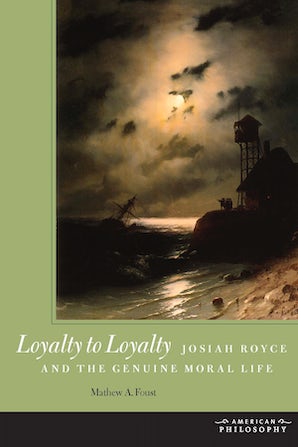 By (author) Mathew A. Foust

As a virtue, loyalty has an ambiguous place in our thinking about moral judgments. We lauded the loyalty of firefighters who risked their lives to save others on 9/11 while condemning the loyalty of those who perpetrated the catastrophe. Responding to such uneasiness and confusion, Loyalty to Loyalty contributes to ongoing conversation about how we should respond to conflicts in loyalty in a pluralistic world.

The lone philosopher to base an ethical theory on the virtue of loyalty is Josiah Royce. Loyalty to Loyalty engages Royce’s moral theory, revealing how loyalty, rather than being just one virtue among others, is central to living a genuinely moral and meaningful life. Mathew A. Foust shows how the theory of loyalty Royce advances can be brought to bear on issues such as the partiality/impartiality debate in ethical theory, the role of loyalty in liberatory struggle, and the ethics of whistleblowing and disaster response.

American philosophy's contributions to philosophical ethics rarely receive such an enthusiastic expositor as Foust, who has done an exemplary job with Harvard's Josiah Royce. - —Choice

“Foust offers not only a major contribution to Royce scholarship but also an important, original, and timely contribution to ethics generally.”---—Kenneth Stikkers, Southern Illinois University

By (author) Mathew A. Foust
Mathew A. Foust is assistant professor of philosophy at Central Connecticut State University. His research and teaching focus on ethics, American philosophy, and comparative philosophy. He is the author of Loyalty to Loyalty: Josiah Royce and the Genuine Moral Life (Fordham University Press, 2012) and several articles on the philosophy of Josiah Royce.