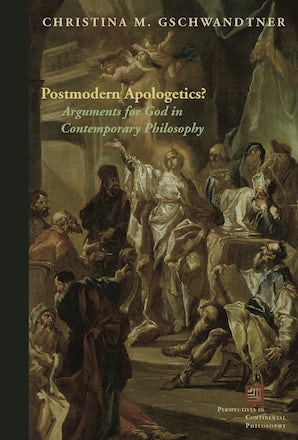 Arguments for God in Contemporary Philosophy

This book provides an introduction to the emerging field of continental philosophy of religion by treating the thought of its most important representatives, including its appropriations by several thinkers in the United States.

Part I provides context by examining religious aspects of the thought of Martin Heidegger, Emmanuel Levinas, and Jacques Derrida. Christina Gschwandtner contends that, although the work of these thinkers is not apologetic in nature (i.e., it does not provide an argument for religion, whether Christianity or Judaism), it prepares the ground for the more religiously motivated work of more recent thinkers by giving religious language and ideas some legitimacy in philosophical discussions.

Part II devotes a chapter to each of the contemporary French thinkers who articulate a phenomenology of religious experience: Paul Ricoeur, Jean-Luc Marion, Michel Henry, Jean-Louis Chrétien, Jean-Yves Lacoste, and Emmanuel Falque. In it, the author argues that their respective philosophies can be read as an apologetics of sorts—namely, as arguments for the coherence of thought about God and the viability of religious experience—though each thinker does so in a different fashion and to a different degree.

Part III considers the three major thinkers who have popularized and extended this phenomenology in the U.S. context: John D. Caputo, Merold Westphal, and Richard Kearney.

The book thus both provides an introduction to important contemporary thinkers, many of whom have not yet received much treatment in English, and also argues that their philosophies can be read as providing an argument for Christian faith.

This book brings together in one place the thought of several philosophers of religion who are not well-known in the English-speaking world, but who have much to say that is relevant to contemporary discussions of religion, whether those discussions occur in philosophy or theology. - —James Faulconer, Brigham Young University

Focuses on Continental phenomenological thinkers whose works prepare and sustain a postmodern apologetic for religion and more specifically Christianity; also discusses their American interpreters. - —The Chronicle of Higher Education

By (author) Christina M. Gschwandtner
Christina M. Gschwandtner teaches Continental Philosophy of Religion at Fordham University. She is the author of Reading Jean-Luc Marion: Exceeding Metaphysics; Postmodern Apologetics? Arguments about God in Contemporary Philosophy (Fordham); Degrees of Givenness: On Saturation in Jean-Luc Marion; and Marion and Theology, besides articles and translations at the intersection of phenomenology and religion.