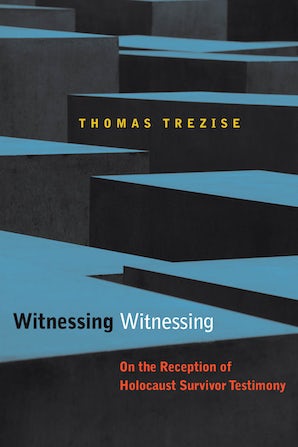 On the Reception of Holocaust Survivor Testimony

Witnessing Witnessing focuses critical attention on those who receive the testimony of Holocaust survivors. Questioning the notion that traumatic experience is intrinsically unspeakable and that the Holocaust thus lies in a quasi-sacred realm beyond history, the book asks whether much current theory does not have the effect of silencing the voices of real historical victims. It thereby challenges widely accepted theoretical views about the representation of trauma in general and the Holocaust in particular as set forth by Giorgio Agamben, Cathy Caruth, Berel Lang, and Dori Laub. It also reconsiders, in the work of Theodor Adorno and Emmanuel Levinas, reflections on ethics and aesthetics after Auschwitz as these pertain to the reception of testimony.

Referring at length to videotaped testimony and to texts by Charlotte Delbo, Primo Levi, and Jorge Semprun, the book aims to make these voices heard. In doing so, it clarifies the problems that anyone receiving testimony may encounter and emphasizes the degree to which listening to survivors depends on listening to ourselves and to one another.

Witnessing Witnessing seeks to show how, in the situation of address in which Holocaust survivors call upon us, we discover our own tacit assumptions about the nature of community and the very manner in which we practice it.

In a series of illuminating reinterpretations and trenchant critiques of classic texts, Witnessing Witnessing challenges fundamental assumptions about Holocaust testimony. This book will surely provoke debate and disagreement, but its profound commitment to ethical listening is inspiring.---—Marianne Hirsch, author of The Generation of Postmemory: Writing and Visual Culture After the Holocaust

. . Witnessing Witnessing' offers rich critical insight and for for continued thought, often based in the appraisal of context-this listening to those who listen to survivors. The author specifically and successfully confronts the notion that the Holocaust is unspeakable, a view that, as the author maintains, 'appears to stand in for a refusal to listen.' - —H-Net Review