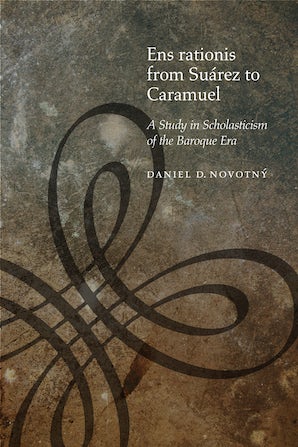 Ens rationis from Suárez to Caramuel

A Study in Scholasticism of the Baroque Era

The influence of the Spanish Jesuit Francisco Suárez (1548–1617) on 17th-century philosophy, theology, and law can hardly be underestimated. In this groundbreaking book, Daniel D. Novotný explores one of the most controversial topics of Suárez’s philosophy: “beings of reason.”

Beings of reason are impossible intentional objects, such as blindness and square-circle. The first part of this book is structured around a close reading of Suárez’s main text on the subject, namely Disputation 54. The second part centers on texts on this topic by other outstanding philosophers of the time, such as the Spanish Jesuit Pedro Hurtado de Mendoza (1578–1641), the Italian Franciscan Bartolomeo Mastri (1602–73), and the Spanish-Bohemian-Luxembourgian polymath Juan Caramuel de Lobkowitz (1606–82). The book should be of interest not just to those concerned with beings of reason but also for all those with a broader interest in the history of the period. It is written in a clear style that will make it appealing both to historians of philosophy and
to anyone interested in applying analytical tools to the history of philosophy.

“The book is a splendid combination of systemic acuity and historical scholarship and provides a much-needed correction to some of the historical injustices of our time. It will be a welcome corrective to current neglect of Baroque philosophy.” - —Nicholas Rescher, University of Pittsburgh

“Novotny’s book is a great work of scholarship and philosophical analysis. It is an ambitious study of the seventeenth-century history of one of the most disputed and controversial concepts in philosophy: the notion of “being of reason” (ens rationis), which is generally contrasted with the notion of “real being” (ens reale). It breaks new ground in the study of an important period in the history of philosophy and is a must read for anyone interested in scholastic philosophy in particular or metaphysics in general.” - —Jorge Gracia, University at Buffalo, SUNY