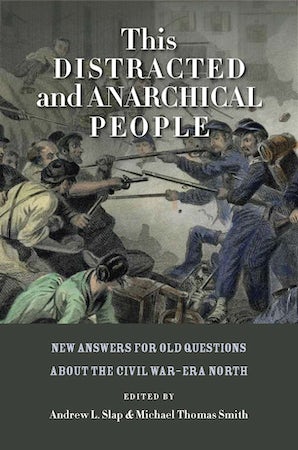 This Distracted and Anarchical People

New Answers for Old Questions about the Civil War–Era North

While most of the fighting took place in the South, the Civil War profoundly affected the North. As farm boys became soldiers and marched off to battle, social, economic, and political changes transformed northern society. In the generations following the conflict, historians tried to understand and explain the North’s Civil War experience. Many historical explanations became taken for granted, such as that the Union Army was ideologically Republican, northern Democrats were disloyal, and German Americans were lousy soldiers. Now in this eye-opening collection of eleven stimulating essays, new and important information is unearthed that solidly challenges the old historical arguments.

The essays in This Distracted and Anarchical People range widely throughout the history of the Civil War North, using new methods and sources to reexamine old theories and discover new aspects of the nation’s greatest conflict. Many of these issues are just as important today as they were a century and a half ago. What were the extent and limits of wartime dissent in the North? How could a president most effectively present himself to the public? Can the savagery of war ever be tamed? How did African Americans create and maintain their families?

This Distracted and Anarchical People highlights the newest scholarship on a diverse array of topics, bringing fresh insight to bear on some of the most important topics in history today—such as the democratic press in the antebellum North, peace movements, the Union Army and the elections of 1864, Liberia and the U.S. Civil War, and African American veterans and marriage practices after Emancipation.

An informative and thought-provoking series of essays that plow through new ground, unearth a wealth of new stories garnered by extensive primary source research and plant new seeds of historical questions into the minds of the reader. - —Brian Craig Miller, Emporia State University

For many years Mark Neely has been one of the most productive and innovative scholars of the Civil War Era. As a mentor, he has passed on his wonderful eye for the unmined source, the intriguing detail, and the unanticipated argument. This wonderful collection of essays is thick with such gems. The reader of this superb volume will find familiar ideas challenged, new perspectives on old questions, and essays that point to exciting new directions for Civil War scholarship. Taken as a group, the volume's authors represent the cutting edge of work on the northern home front. - —J. Matthew Gallman, University of Florida

This compelling set of essays underscores the vibrancy of the field of Civil War studies. Wide-ranging in their approach to political, social, and military aspects of the conflict, they challenge a number of prevailing interpretive conventions and suggest numerous avenues for further investigation. I have no doubt that they will inspire some readers and upset others--a sure indication that they have achieved a major success. - —Gary Gallagher, author of The Union War

Anyone interested in the Civil War era should savor this book. The Distracted and Anarchical People breaks a lot of new historiographic ground. - —Michael Green, Community College of Southern Nevada

One of the strengths of the volume is the consistent quality of its submissions. That said, the volume succeeds in its stated goal of challenging assumptions and sparking debate. The essays are uniformly well researched and provocative, and many contain very thorough discussions of the suggesting avenues for future research. 'This Distracted and Anarchical People' successfully provides Civil War scholars with a useful, thought provoking resource. - —The Journal of Southern History

All will be impressed... with the authors' research in primary sources, and how they effectively engage and challenge previous works related to their topics. - —Blue & Gray Magazine

Edited: Michael Thomas Smith
Michael Thomas Smith is an assistant professor of history at McNeese State University. He is the coeditor of Letters from a North Carolina Unionist: John A. Hedrick to Benjamin S. Hedrick, 1862–1865 (North Carolina Division of Archives and History, 2001), and the author of A Traitor and a Scoundrel: Benjamin Hedrick and the Cost of Dissent (University of Delaware Press, 2003) and The Enemy Within: Fears of Corruption in the Civil War North (University of Virginia Press, 2011). His articles have appeared in American Nineteenth Century History, the New England Quarterly, and other journals.