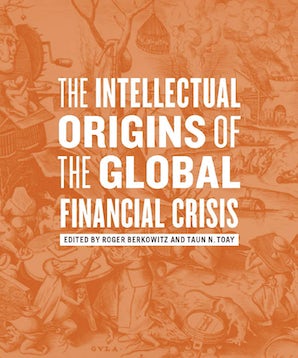 The Intellectual Origins of the Global Financial Crisis

With Arendt as a catalyst, the authors probe the philosophical as well as the cultural origins of the great recession. Orienting the volume is Arendt’s argument that past financial crises and also totalitarianism are rooted, at least in part, in the tendency for capital to expand its reach globally without regard to political and moral borders or limits. That politics is made subservient to economics names a cultural transformation that, in the spirit of Arendt, guides these essays in making sense of our present world.

Including articles, interviews, and commentary from leading scholars and business executives, this volume offers views that are as diverse as they are timely. By reaching beyond “how” the crisis happened to “why” the crisis happened, the authors re-imagine the recent financial crisis and thus provide fresh thinking about how to respond.

“An important contribution to the discussions about the origins and character of the financial crisis.” - —Jacob Dahl Rendtorff, Roskilde University

“A novel, intriguing and fruitful angle from which to approach the recent financial crisis." - —Gary Mongiovi, St. John's University

“An important contribution to the discussions about the origins and character of the financial crisis.”---—Jacob Dahl Rendtorff, Roskilde University

“A novel, intriguing and fruitful angle from which to approach the recent financial crisis."---—Gary Mongiovi, St. John's University

Edited: Roger Berkowitz
Roger Berkowitz is the Academic Director of the Hannah Arendt Center for Politics and Humanities and Associate Professor of Politics, Human Rights, and Philosophy at Bard College.

Edited: Taun N. Toay
Taun N. Toay is a Research Analyst at the Levy Economics Institute and a Visiting Lecturer in economics at Bard College. He has written and co-written articles on subjects ranging from direct job creation in Greece and South Africa to the destabilizing impacts of euro-adoption.