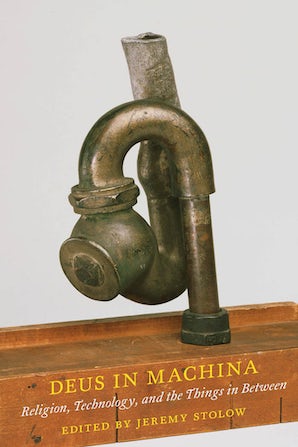 The essays in this volume explore how two domains of human experience and action—religion and technology—are implicated in each other. Contrary to commonsense understandings of both religion (as an “otherworldly” orientation) and technology (as the name for tools, techniques, and expert knowledges oriented to “this” world), the contributors to this volume challenge the grounds on which this division has been erected in the first place.

What sorts of things come to light when one allows religion and technology to mingle freely? In an effort to answer that question, Deus in Machina embarks upon an interdisciplinary voyage across diverse traditions and contexts where religion and technology meet: from the design of clocks in medieval Christian Europe, to the healing power of prayer in premodern Buddhist Japan, to 19th-century Spiritualist devices for communicating with the dead, to Islamic debates about kidney dialysis in contemporary Egypt, to the work of disability activists using documentary film to reimagine Jewish kinship, to the representation of Haitian Vodou on the Internet, among other case studies.

Combining rich historical and ethnographic detail with extended theoretical reflection, Deus in Machina outlines new directions for the study of religion and/as technology that will resonate across the human sciences, including religious studies, science and technology studies, communication studies, history, anthropology, and philosophy.

The modern categories 'religion' and 'technology' would have us sever all connections between them and the entities that pertain to them and set them on mutually exclusive planes: one, a plane of faith, the sacred, and meaning; the other, a plane of the reason, the profane, and material reality. Enter Deus in Machina, not as a plot device, but as a subtle and complex restaging of this modern drama through a series of brilliant essays. Some of the essays reveal how the categories religion and technology were, and continue to be, segregated, or purified, in conflicts over the authenticity and efficacy of hybrid practices, such as American séances, Japanese Buddhist healing prayers, and Ghanaian Charismatic Christian machines that emit divine sparks. All of the essays restore the connections between the technical and the religious by foregrounding hybrid rites, techniques, and mechanisms. Clocks and calendars join heavenly and earthly realms. The Hebrew God works through documentary films. Vodou gods and goddesses colonize cyberspace. Dark spirits haunt techno-modern men and women. Together, the essays, including Jeremy Stolow’s masterly introduction, evocatively theorize the ways in which the religious and the technical are always linked, overlapping, and entangled. In the process, Deus in Machina reconfigures both categories and enables us to re-script the drama of modernity. - —Susan Harding, University of California, Santa Cruz

... an interesting reminder of the interconnectedness of various aspects of human culture. - —Choice

. . . Stolow takes an interdisciplinary voyage through the many different contexts in which religion and technology meet. By putting god back into the machine, he and the featured authors revise the idea that the two exist as separate areas of action and experience. - —Concordia

Edited: Jeremy Stolow
Jeremy Stolow is Associate Professor in the Department of Communication Studies at Concordia University. He is the author of Orthodox By Design: Judaism, Print Politics, and the ArtScroll Revolution and the essay "Salvation by Electricity," in Religion: Beyond a Concept, ed. Hent de Vries (Fordham).