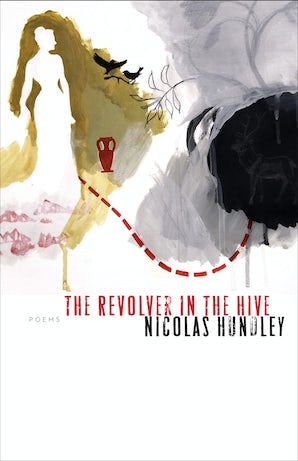 The Revolver in the Hive

The Revolver in the Hive takes place in the aftermath of tragedy, where grief is recognizable but contorted into unsettling forms. In this remarkable debut, Nicolas Hundley’s poems chronicle with honesty—and often bitter humor—a harrowing journey through loss, death, and mourning. A widow “hauls a sack filled with the
limbs of statues,” and mourners become “familiar as a pet is familiar, returning years later, / stitched up from experimentation.”

Juxtaposing such incongruous images, Hundley creates uncanny worlds in which antiquated objects and characters coexist with those from a sinister future, in which wound-dressers and alchemists coexist alongside “heretical machines enacting misdeeds.” Religion, fatherhood, and masculinity are all explored in Hundley’s tales: A bicycle becomes the subject of worship, inventors act as parents to their machines, and an industrialized human reproduction takes place in factories.

In Hundley’s hands, words clang together in startling ways, and the repetition of phrases and images leads to unexpected transformations. The poems brilliantly use dream logic to fuel their imagery, even as they call upon a variety of poetic forms—from the prose poem to the sonnet—to evoke literary traditions that recall the gothic
and the surreal. Moving and strange, Hundley’s poems are unforgettable.

The reconciliation of a salvation and surrender becomes the task of a intermittent series of prose poems here, and these are some of the best moments in the collection. - —The American Reader

“Nicolas Hundley’s book, The Revolver in the Hive, is so full of surprises it applauds itself into an eerie silence. I love these poems. They are full of magic.
One cannot paraphrase them. They are simply there, like a comet or a frog.”

“In The Revolver in the Hive, Nicolas Hundley makes use of so much of what
poetry has to offer us. Everything in the book is touched with poetry’s powers.
Hundley loves poetry and he respects us, the best combination to find when one encounters a new book. It’s alive in these pages; it’s significantly additional.”

By (author) Nicolas Hundley
Nicolas Hundley’s work has appeared in FIELD, Massachusetts Review, Crazyhorse, New Orleans Review, Gulf Coast, Verse, POOL, LIT, Conduit, Salt Hill, Seattle Review, and other publications. He attended the MFA Program for Poets and Writers at the University of Massachusetts–Amherst and is a lecturer and the director of communications for the College of Communication at the University of Texas at Austin.