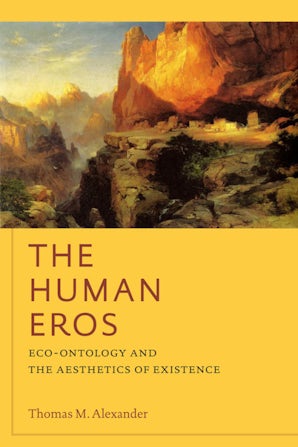 Eco-ontology and the Aesthetics of Existence

The Human Eros explores themes in classical American philosophy, primarily the thought of John Dewey, but also that of Ralph Waldo Emerson, George Santayana, and Native American traditions. Alexander’s primary claim is that human beings have an inherent need to experience meaning and value, a “Human Eros.” Our
various cultures are symbolic environments or “spiritual ecologies” within which the Human Eros seeks to thrive. This is how we inhabit the earth.

Encircling and sustaining our cultural existence is nature, yet Western philosophy has not provided adequate conceptual models for thinking ecologically. Alexander introduces the idea of “eco-ontology” to explore ways in which this might be done, beginning with the primacy of Nature over Being but also including the recognition of possibility and potentiality as inherent aspects of existence. He argues for the centrality of Dewey’s thought to an effective ecological philosophy. Both “pragmatism” and “naturalism,” he shows, need to be contextualized within an emergentist, relational, nonreductive view of nature and an aesthetic, imaginative, nonreductive view of intelligence.

“This book represents a significant contribution to knowledge in its treatment of familiar figures and in its own tapestry-type approach. It is wide both in scope and in scholarship and will be a welcome addition to any philosopher, especially in the American tradition.”---—William T. Myers, Birmingham-Southern College

“This is a masterful piece of writing. The author’s wide range of knowledge is
matched by a dexterity in writing—both of which are enviable.”