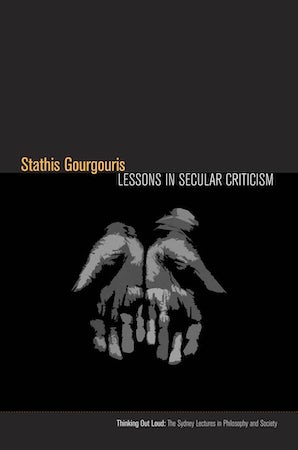 Secular criticism is a term invented by Edward Said to denote not a theory but a practice that counters the tendency of much modern thinking to reach for a transcendentalist comfort zone, the very space philosophy wrested away from religion in the name of modernity. Using this notion as a compass, this book reconfigures recent secularism debates on an entirely different basis, by showing (1) how the secular imagination is closely linked to society’s radical poiesis, its capacity to imagine and create unprecedented forms of worldly existence; and (2) how the space of the secular animates the desire for a radical democratic politics that overturns inherited modes of subjugation, whether religious or secularist.

Gourgouris’s point is to disrupt the co-dependent relation between the religious and the secular—hence, his rejection of fashionable languages of postsecularism—in order to engage in a double critique of heteronomous politics of all kinds. For him, secular criticism is a form of political being: critical, antifoundational, disobedient, anarchic, yet not negative for negation’s sake but creative of new forms of collective reflection, interrogation, and action that alter not only the current terrain of dominant politics but also the very self-conceptualization of what it means to be human.

Written in a free and combative style and given both to close readings of texts and to gazing off into the broad horizon, these essays cover a range of issues—historical and philosophical, archaic and contemporary, literary and political—that ultimately converge in the significance of contemporary radical politics: the assembly movements we have seen in various parts of the world in recent years. The secular imagination demands a radical pedagogy and unlearning a great many established thought patterns. Its most important dimension is not battling religion per se but dismantling theological politics of sovereignty in favor of radical conditions for social autonomy.

Lessons in Secular Criticism is a timely and polemical manifestation of parrhēsia. It offers compelling evidence that ‘post-secularism’ comes neither ‘after’ the secular nor does it understand the 'secular'. Moving effortlessly between literary theory, philosophy, and politics, Gourgouris offers a profoundly democratic defense of criticism without transcendent principles and a critical defense of democracy without neoliberal capitalism. Lessons in Secular Criticism brilliantly diagnoses the key antagonism of our times as that between various heteronomies (theology, capital, transcendence) and autonomy, the power (kratos) of the demos to become otherwise. Read it.---—Costas Douzinas, Birkbeck College, University of London

This book defines the secular: 'to encounter one’s life as a worldly affair and responsibility that rests on no foundation.' This definition drives Gourgouris’ intervention in the critical debate around secularism and his reading of global popular revolts as lived forms of secular criticism. Erudite, thrilling, and provocative, this is, simply, urgent reading.---—Martin Harries, University of California, Irvine

Gourgouris presents an incredibly intelligent means by which the secular can address [the challenge to the secular] without ultimately disturbing its own enabling habits. - —Daniel Colucciello Barber, Los Angeles Review of Books

What is secular criticism? The expression’s coinage is attributed to Edward Said, and as Stathis Gourgouris demonstrates, it is a key politico-aesthetic concept that resists definition. Identifiable neither with the remainders of political theology in democracy nor with an immanent, non-transcendental metaphysics, (though combining elements of both), secular criticism is cast as something on the order of a teaching; an initiation into worldly praxis. In the contemporary moment – rife with crude generalizations about cultures of belief and sacral icons – Lessons in Secular Criticism enlists philosophy to rethink basic assumptions underwriting the politics of religion and culture. We discover here new forms of secularism as “heteronymy:” modes of self-alteration, self-enactment, conviction, tragic life and poiëtic existence. This book is a model of criticism in action offering creative engagements with the work of Edward Said, Talal Asad, Judith Butler, Cornelius Castoriadis, Charles Taylor and Claude Lefort among others.---—Emily Apter, New York University

. . .Gourgouris not only challenges the metaphysical commitments he sees in traditional formations of secularism and religion, but he also significantly expands the potential meaning of the term 'secular criticism' . . . - —College Literature, Vol. 41.3

Written in a free and combative and given both to close readings of texts and to gazing off into the broad horizon, these essays cover a range of issues historical and philosophical, archaic and contemporary, literary and political... - —Theological Book Review

"Gourgouris's book is an astonishing achievement: it does not simply set the debate about secularism on an entirely new basis, in addition it sets the basis of a theory of radical democracy in modernity and does so by applying the theory to a variety of historical events from the past few years.”---—Dimitris Vardoulakis, University of Western Sydney

By (author) Stathis Gourgouris
Stathis Gourgouris is Professor of Comparative Literature and Society at Columbia University. He is author of Dream Nation: Enlightenment, Colonization, and the Institution of Modern Greece; Does Literature Think?: Literature as Theory for an Antimythical Era; Lessons in Secular Criticism; and Ενδεχομένως αταξίες (Contingent Disorders). His most recent book is The Perils of the One.