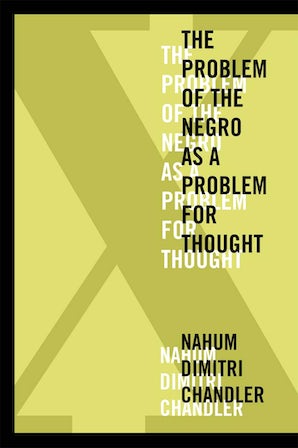 “Nahum Chandler is one of the very few truly indispensable thinkers at work in the study of the African diaspora, which is, as he so brilliantly shows, the study of the modern world.” - —Fred Moten, Duke University

“X presents us with a new reading of Du Bois, who has been viewed too simply as ahistorian and sociologist rather than as a thinker in the rich sense that Chandler gives to that word. Chandler’s arguments will prove indispensable to any future directions for the study of race, colonialism, or globality.” - —David Lloyd, University of California, Davis

By (author) Nahum Dimitri Chandler
Nahum Dimitri Chandler serves on the faculty of the School of Humanities at the University of California, Irvine, in African American Studies, ComparativeLiterature, and European Languages and Studies. He is the author of X: The Problem of the Negro as a Problem for Thought and The Problem of Pure Being: Annotations on the Early Thought of W. E. B. Du Bois and the Discourses of the Negro, both from Fordham, as well as Toward an African Future – Of the Limit of World.