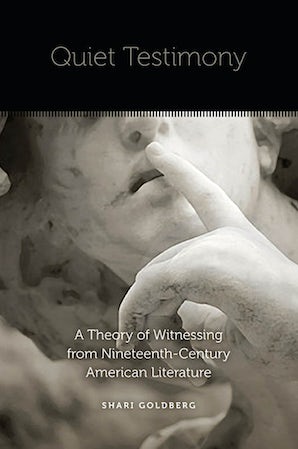 A Theory of Witnessing from Nineteenth-Century American Literature

The nineteenth century was a time of extraordinary attunement to the unspoken, the elusively present, and the subtly haunting. Quiet Testimony finds in such attunement a valuable rethinking of what it means to encounter the truth. It argues that four key writers—Emerson, Douglass, Melville, and Henry James—open up the domain of the witness by articulating quietude’s claim on the clamoring world.

The premise of quiet testimony responds to urgent questions in critical theory and human rights. Emerson is brought into conversation with Levinas, and Douglass is considered alongside Agamben. Yet the book is steeped in the intellectual climate of the nineteenth century, in which speech and meaning might exceed the bounds of the recognized human subject. In this context, Melville’s characters could read the weather, and James’s could spend an evening with dead companions.

By following the path by which ostensibly unremarkable entities come to voice, Quiet Testimony suggests new configurations for ethics, politics, and the literary.

“Goldberg’s book is both timely and exciting. Her readings of Emerson (a writer whose work has always seemed to me to resist the pressures of close reading) are quite simply brilliant American literature. Her work, more than that of any other critic since Charles Feidelson, allows us to teach Emerson and Melville together by pointing to similarities rather than differences as well as to see their formal and ethical concerns as establishing a trajectory that includes the work of Douglass and James. Goldberg’s voice is one of the most exciting ones among the current group of young scholars of nineteenth-century.” - —Edgar Dryden, University of Arizona

Quiet Testimony proceeds from a deceptively simple question: Who testifies in nineteenth-century America? The several answers Shari Goldberg exacts through the book’s five chapters amount to a provocative reformulation of the concept of human agency, with significant ethical and political consequences. - —Textual Practice

[T]heoretically sophisticated . . . Goldberg considers how each of the writers she considers demonstrates a connection to earlier, 'enchanted' modes of confronting the natural world and the potentially permeable boundaries between the worlds of the living and the dead. - —Studies in the Novel

[Goldberg's] careful consideration of how Emerson, Douglass, Melville, and James think and write about testimony reveals myriad and unexpected sites of meaning. . . . Goldberg seeks to adjust not only how we read these particular writers’ works but how we read in general by considering the literary text’s role in teaching us to understand and respond sensitively to the extra-textual world. - —The Henry James Review

This is an ambitious, daring, and provocative book, and one that resonates deeply and significantly with contemporary debates over the relation between testimony and historical truth that have occupied a great deal of literary and philosophical work within the last two decades. Goldberg’s wonderful readings of the ways in which nineteenth-century writers understood the force of silence in the act of bearing witness suggest that testimony is perhaps most audible, most powerful, when we are able to hear its silences, the silences that give voice not only to the issues that felt most urgent for these writers but also to those that are of most concern for us today. - —Eduardo Cadava, Princeton University

Through Shari Goldberg’s passionately attentive readings of core texts within 19th century American literature, Quiet Testimony bears witness to the intimacy between testimony and literary thinking, and in so doing provides a model for radically rethinking the very concept of literature. - —Donald Pease, Dartmouth College

“This is a major and exemplary work that deftly situates the authors in their historical situations while at the same time deeply respecting their thinking, reading them in order to adduce their complicated attitudes toward testimony, which Goldberg successfully advances as an urgent and central issue for each of them.” - —Mitchell Breitwieser, University of California, Berkeley

By (author) Shari Goldberg
Shari Goldberg is Assistant Professor of Literary Studies at the University of Texas at Dallas.